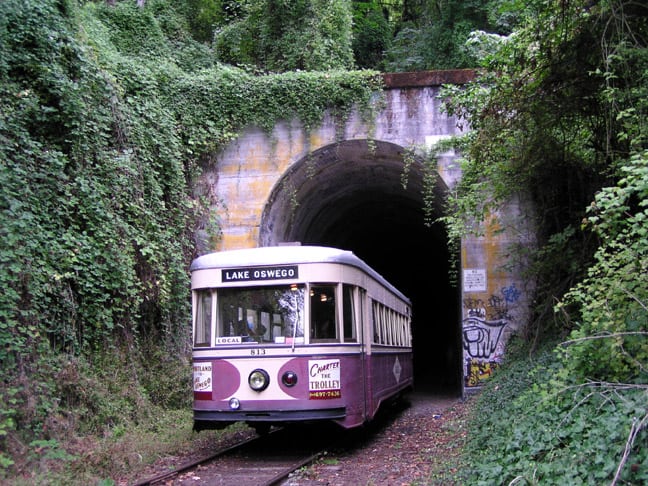 The Willamette Shore Trolley is an example of a Vintage Trolley operation which is being used to help preserve a key rail right-of-way for future transit use. The seven mile line is owned by a consortium of government agencies and may someday become an extension of the Portland Streetcar. Since 1987, a local railway museum has operated a seasonal three-days-a-week trolley operation using a single car with a tow-behind generator. The line connects the edge of Downtown Portland with the nearby suburb of Lake Oswego. In late 2004, Portland Metro plans to begin a study of transportation alternatives in this corridor including rail transit and the opportunities for developing a bicycle/pedestrian pathway in conjunction with the existing and future rail service. Additional information about proposed future uses of the line is available on the Metro Lake Oswego Transit Project website.

History of the Line: The right-of-way of the Willamette Shore Trolley was first established in 1885-1887 as the Portland and Willamette Valley Railroad, which began operation in July, 1887. It was later purchased by the Southern Pacific Railroad

The railroad had a major impact on the development of southwest Portland. Initially 14 trains operated between Portland and “Oswego” (as it then was known) and became the main transportation link for developing residential communities along the route. The line was electrified in 1914 and passenger traffic hit it peak in 1920 with SP running 64 “Red Electrics” to and from Portland and Oswego daily. Passenger service ended on October 5, 1929, while freight service continued until 1983.

In August of 1984, the Interstate Commerce Commission granted Southern Pacific permission to abandon the line. In November of that year the Portland Friends of the Willamette River Greenway, a non-profit corporation, was asked to assist seven government entities in their efforts to acquire the line, to guarantee the preservation of the right-of-way for future mass transit.

From September through December 1987, the Oregon Electric Railway Historical Society operated a Trolley on the line to determine the feasibility of such a service there. Negotiations between Southern Pacific and the governmental entities continued until the six-mile line was purchased in the fall of 1988. Trolley Service began on a long term basis in July 1990, with another operator.

Since then, the line has been extended from its original southern terminus, one half mile south to downtown Lake Oswego. In 1995 the Oregon Electric Railway Historical Society again became the operator of the Trolley Service, in cooperation with the Cities of Lake Oswego and Portland, Clackamas and Multnomah Counties and Metro (a tri-county government agency).

The Lake Oswego end of the line also features a two-track carbarn where cars are housed and maintenance performed. All cars are operated using a tow-behind generator, and there are currently no plans to install overhead wire.

Equipment: A couple of different cars owned by the OERHS have operated on the Willamette Shore Trolley since its inception. These include a double-deck trolley from Blackpool, and a 1932 Brill “Master Unit” which originally operated on both local and interurban routes of the Portland Traction Company.

2/9/04- PORTLAND, OR: Tri-Met, operator of Portland’s light-rail system, is now looking hard at a possible new streetcar line. A study done by the agency indicates that a new streetcar linebuilt along the current alignment of the Willamette Shore Trolley (WST), a tourist/vintage line, would be more practical that a “heavier” light-rail system. WST operates on former Southern Pacific right-of-way which that railroad abandoned in 1983. Oregon law requires abandoned rights-of-way to be redistributed to former owners if not reused for rail projects. The Willamette Shore Trolley was organized as a method to “hold” the right-of-way for future development. Under Tri-Met’s plan, the new streetcar line would run 5.6 miles from a connection with the Portland Streetcar in its yet to be built North Macadam Urban Renewal Area extension to a park-n-ride facility in Lake Oswego. Streetcars would operate on a 12 minute headway during rush periods with a run time of 15 minutes between Southwest Bancroft Street (Portland) and Lake Oswego, or 25 minutes all the way from downtown Portland. Costs to build the line are expected to be relatively low as so much can be reused, including a 1,300 foot tunnel and two trestles. The line is expected to cost approximately $81 million, serve ten stations and carry about 600 people per hour during peaks. Source: New Electric Railway Journal website