Operated as part of the city’s municipal transit system, San Francisco Municipal Railway, the “F” line provides a direct rail link between Downtown and the Fisherman’s Wharf area. The line operates from Market and Castro, down the surface tracks on Market St., and along the northern waterfront to Fisherman’s Wharf at Jones and Beach Streets (near the terminus of the Powell-Hyde cable car line). The “F” line has the highest ridership of any U.S. streetcar line, with 25,000 daily riders by 2007 (well over 8 million riders a year). Muni is in the process of completing additional cars to increase capacity on the “F” Line and expand service with the creation of the new “E”-Embarcadero Line.

The “F” Line is public transportation with a definite historic flavor; base service is provided with 17 refurbished PCC cars and 10 ‘Peter Witt’-type cars imported from Milan, with a variety of other historic cars from around the world filling in where needed. Each of the PCC cars is painted in a different “vintage” color scheme, representing classic paint schemes from cities around the country. It should also be noted that while operating to and from the maintenance facility where they are kept, the “F” line streetcars also share tracks with modern streetcars. The new “E” Line service will also feature old and new cars sharing the same tracks.

Serving in a “friends of the streetcar” support role is the volunteer Market Street Railway, providing assistance with historic car acquisition, restoration, interpretation and serving an important general advocacy role. Through their cooperative arrangement with the Muni, the MSR has a small office and work area at Muni’s Duboce Yard on Market Street, where volunteers take on a variety of projects. In 2007, the MSR also opened the San Francisco Railway Museum in a storefront at the foot of Market St.

There’s nothing quite like riding one of Muni’s historic cars down Market St. Especially during rush hour when the street is packed with traffic and the sidewalks crowded with humanity. The buildings at the Embarcadero end of the line tower over the scene, creating a canyon below for the the artery that is Market Street. It’s a once commonplace scene that was repeated daily in every big city in the United States- streetcars faithfully moving the masses through the crowded urban center. And with the public’s overwhelming response to the new service, its a scene that will be repeated daily for many years to come!

“F” Line streetcars operate along the length of Market Street, a total of three miles from the Castro Street terminal to the Embarcadero. Market Street is one of the country’s most famous “streetcar thoroughfares”, and was equipped with four tracks from the late ‘Teens into the 1950’s. Following completion of the BART heavy rail subway and the streetcar subway above the BART tracks, surface operation of streetcars on Market was scheduled to end altogether in 1982. However, the start of the San Francisco Historic Trolley Festival the following year changed that. The Trolley Festival had been created to provide an interim replacement for the cable car system that was then being rebuilt. The festivals were such a success, however, that they continued even after the cable car system returned to operation. Regular “F” Line historic streetcar service on Market began in 1995.

The long-awaited extension of San Francisco’s “F” historic streetcar line opened on March 4, 2000, combining the existing service on Market St. with an additional 2.8 miles of new trackage along the waterfront Embarcadero. Prior to the 1989 Loma Prieta earthquake, the Embarcadero had been covered with a freeway. Instead of rebuilding the heavily damaged freeway after the earthquake, the City instead re-visioned the area and created a grand waterfront boulevard, with accommodation for streetcar service in the median.

The southern portion of the Embarcadero was rebuilt with a connection to the Muni Metro Subway, and currently hosts modern streetcars operating to the Caltrain commuter rail station, a new ballpark, and the new Third Street “T” Line. Plans call for extension of historic streetcar service to the ballpark / Caltrain terminus, pending funding and the availability of additional historic cars. Click here for more information on the “E” Line.

12/10 Update: The first of the rewired PCC cars returned to San Francisco from Brookville Equipment during November. The car’s original GE PCC propulsion system has been completely replaced with a new Westinghouse-type PCC system supplied by Bombardier through their Woltan subsidiary in Poland. The new system remains basically true to the original Westinghouse PCC electrical design, although the original MG set / blower has been replaced with a modern low voltage power supply / inverter / blower package.

On December 2 another Muni streetcar milestone took place when a ribbon-cutting ceremony was held to celebrate the official opening of the new car storage building at the Geneva Carhouse. At long last much of the historic fleet will now have an indoor shelter! Thanks to Karl Johnson for the news and pictures.

5/10 Update. Brookville Equipment continues to work on the complete rebuild of historic streetcar No. 1 and is also making progress with the work on the single and double-ended PCC cars. Click here for an entry on the Market Street Railway blog covering the news. The big news is that construction has finally started on the historic streetcar carbarn at the Geneva maintenance facility. The new building will provide shelter for 24 historic streetcars which until now have been stored outdoors, exposed to the weather. See the photo below and check the Market Street Railway blog for more details. The pictures also document a recent charter using Market Street Railway Car 578. Built in 1895, it survived as a work car, and was restored in 1956 for the 50th anniversary of the 1906 earthquake. 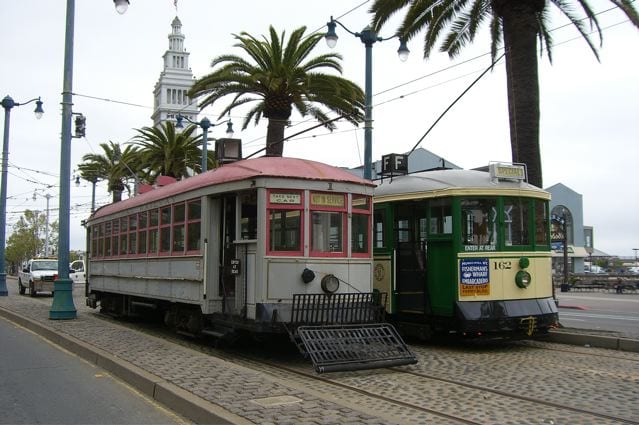 5/09 Update. Muni has awarded a $1.9M contract to Brookville Equipment for the complete overhaul of historic streetcar No. 1. Work is scheduled to begin this summer. In anticipation of the car being moved to Brookville PA., it was moved to the new Muni Metro East facility where it can be stored under cover until it leaves for Pennsylvania. Click here for an entry on the Market Street Railway blog covering the news.

07/08 Update. As ridership on the “F” Line continues to grow, the Muni is working to field additional cars to meet the demand. The eleven PCC cars overhauled in 2005-2007 are now scheduled to receive additional work, including complete rewiring and conversion of control systems to match the balance of Muni’s PCC fleet. Additionally, four more double-ended PCCs are to be rebuilt, along with historic PCC 1040 (the last PCC car built in America, delivered in 1952) and Muni historic car No. 1. A pre-bid conference for the contracts to perform the aforementioned work was held in late July, with bids due in August. Work is expected to take approximately two years.

In other historic car news, Muni Car 162 is poised to re-enter service following a multi-year restoration effort. The car was acquired by the Muni in 2003 from the Orange Empire Railway Museum in Southern California with help from the MSR. Restoration was a cooperative venture between Muni and MSR. The car made its debut for the American Public Transportation Association (APTA) Rail Transit Conference, hosted by San Francisco in June of 2008. The car is expected to enter regular passenger service shortly.

06/06 Update. Brookville Equipment Corporation is making excellent progress on the refurbishment of the eleven PCC cars acquired by Muni from New Jersey Transit. Based on the experience of refurbishing the first of the cars in 2005, the scope of work was expanded to cover additional needed work. The cars are now expected to enter service later in 2006, adding badly needed capacity to the F-Line, which continues to carry record numbers of riders.

03/05 Update. In late 2004, Muni awarded a contract to Brookville Equipment to refurbish the eleven PCC cars it acquired from New Jersey Transit . The cars will hopefully begin arriving in late 2005, adding badly needed capacity to the F-Line, which continues to carry record numbers of riders.

11/03 Newark PCCs purchased. The Market St. Railway, which supports Muni’s Vintage Trolley operations, has announced that the Muni has reached a deal to purchase 11 PCC-type trolley cars which Newark retired in 2001. Over the last few years, Muni has purchased a number of other PCC cars from various owners around the country, and in addition to the 11 Newark cars, now owns 31 unrestored PCC cars/carbodies.

At minimum, the Newark cars will require several modifications prior to being used in San Francisco, but their acquisition demonstrates Muni’s ongoing commitment to its popular Vintage Trolley operations.

12/01- Planning for Muni’s next historic streetcar line, Route “E- Embarcadero” continues. One proposal receiving consideration is an extension of the route, beyond the current F-Line terminal at Fisherman’s Wharf, to serve the Fort Mason area. The Market St. Railway website has an excellent write-up on the proposed service here. Source and photo: Market St. Railway. 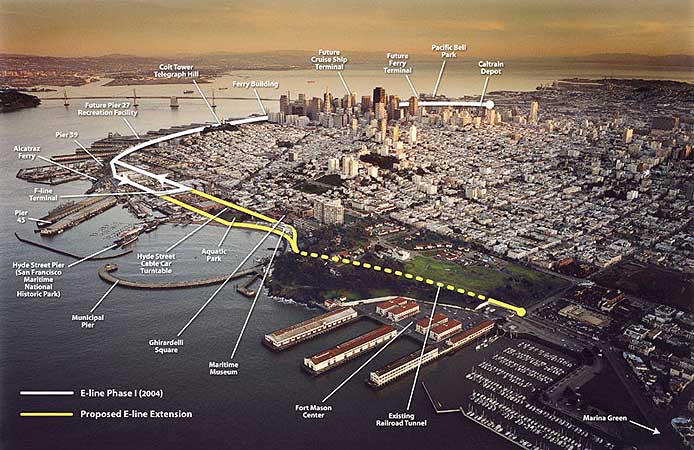 8/01- Muni is seeking to expand its PCC car fleet, and has already purchased several additional cars.

Find the latest odds for your San Francisco 49ers at BettingNFL.org and get up to $500 in free bets from Bovada Sportsbook when redeeming this Bovada bonus code.