Seattle’s George Benson Waterfront Streetcar is a 2-mile single-track line with two passing sidings. It utilizes a former freight line through the city’s central waterfront district as well as a .4 mile extension in city streets to reach the International District, where it connects with the downtown transit tunnel and the Amtrak station, and is a short walk away from the new ballpark. The system operates five double-ended streetcars imported from Melbourne, with up to three cars running at one time. Each of these rebuilt 1924-vintage cars can carry up to 43 seated and 40 standing passengers, and have accommodations for one wheelchair. The line uses high-level platforms exclusively, all of which are on the same side of the track. The cars have thus been rebuilt without the original running boards and step-up entry, and have been reconfigured with doors on only one side.
Conceived in 1974 as an easily-implemented tourist amenity, the idea quickly encountered a series of political, regulatory and other obstacles. Operation of the initial 1.6 mile leg finally began in May 1982, with a .4 mile extension in 1990. In 1998 the line was thoroughly rebuilt including installation of concrete ties. The line is operated by King County Metro as its Route 99, and uses exclusively paid staff. Two-person crews are standard practice, and fare collection is on board the cars utilizing traditional fareboxes. The fare structure is standardized with other King County Metro Services. Off-peak fares are $1.25, and Peak fares are $1.50. Although the streetcar line runs through the Downtown “Ride Free Area”, a one-zone fare is collected at all times. Transfers good for 90 minutes are available at no additional charge, permitting riders to hop on and off as they choose, making the streetcar a great way to see the sights along the waterfront. The Waterfront Streetcar carried 450,000 passengers in 2000.

The cars are maintained in a modern maintenance building at the north end of the line. The maintenance building was constructed in 1982 with the opening of the line, and was later expanded from two tracks to its current three-track configuration. Heavy overhaul work is done at another Metro facility, and cars are trucked back and forth. It should also be noted that the northern part of the line is on a shared right-of-way with a busy BNSF railroad mainline, and shares four grade crossings, all of which are equipped with gates and flashers. No special fencing exists between the shared tracks, although all of the tracks are, as a group, separated from the paralleling sidewalk with a low-level fence.

ADA Accommodations: The entire system is ADA accessible. With level boarding at all the stations, the rebuilt Melbourne cars lend themselves very nicely to wheelchair access. Each car also carries a supplementary ramp which can be placed on the floor by the conductor to bridge the very small gap between the car and the platform edge.

Summary: Despite the fact that much of the waterfront district served by the line is paralleled by a very ugly double-deck concrete freeway, the area is humming with pedestrians and commercial activity. The locals are very proud of their streetcar line, and that’s reflected in the manner in which the line is operated. Its been in operation almost twenty years now and it’s really a model operation.

News and Updates (scroll down for latest updates)

Update 7/2/01- Due to construction of a new building along 5th Avenue South, the south end of the trolley line has been shortened by a few hundred feet and a new temporary terminal built along Main St. between 4th and 5th. Opened in early June, the new station is a simple affair, built primarily of wood with a concrete foundation. To accommodate the new station and the adjacent construction site, the eastbound traffic lane on Main St. has been closed between 4th and 5th. Because of the steep grade on Main St., passengers are not permitted to wait on board the car during layovers.

Also, effective July 1, a .25 cent fare increase went into effect for all King County Metro services, including the Waterfront Streetcar.

Update 11/03- Studies continue to examine potential route extensions, and even a complete rebuild of the line in conjunction with replacement of the Alaskan Way viaduct. The Seattle Department of Planning and Urban Development has a webpage which details a number of options for improving waterfront connectivity. In other streetcar news, the line’s stations are receiving a face lift.

Update 8/26/04- Plans for South Lake Union Streetcar continue to move ahead. The Seattle Times reported the following news in an August 19 article: “The Seattle City Council yesterday set conditions for building a South Lake Union streetcar, including restrictions on the use of city funds, and released $2 million in state grants for preliminary design of the proposed 1.3-mile line. The full council’s unanimous vote also approved $360,000 to study streetcar extensions from South Lake Union to the University of Washington and from Pioneer Square to the Chinatown International and Central districts.”

Also, a detailed streetcar feasibility study commissioned by the Seattle Department of Transportation was released on June 30, and provides additional details about the proposed new line just north of downtown Seattle. The line would use modern streetcar vehicles similar to those now in operation in Portland and Tacoma. The study also covers potential extensions of the existing Waterfront Streetcar Line at both its north and south ends.

The study also contains some discouraging news, reporting that the existing line’s maintenance building may need to be removed to make way for the Seattle Art Museum’s Olympic Sculpture Park project. The study states that “King County is conducting a separate study to identify potential new locations to maintain the Waterfront Streetcar, but does not currently have funding to relocate the facility”. Further complicating the situation is the planned project to replace the aging Alaskan Way viaduct, in whose shadow the majority of the present Waterfront Streetcar is now operated. The report indicates that it is likely that only the extreme north and south ends of the line could remain operable during the construction period, estimated at this time to be eleven years.

Update 3/30/05- The saga of relocating the line’s maintenance building continues, although a potential solution may now be at hand. Extensive press coverage about the impending shutdown of the line has certainly helped to raise awareness about the issue, and the Port of Seattle has stepped forward with an offer for an alternative location. The Port has offered a location near its Elliot Bay grain silos, about 1.2 miles to the north from the present terminus of the line. The concept involves extending the line, providing the added benefit of service to a nearby biotech campus.

Update 7/27/05- The saga continues, and it looks as though the Waterfront Streetcar line will be forced to shut down later this year, at least for a time. Various alternatives for building a new maintenance building continue to be studied, but none of the options seem to provide for the existing facility to remain in service pending construction of its replacement. The Port of Seattle did recently contribute $1M towards a $9M plan to erect a new facility in Pioneer Square. The ongoing saga is also receiving national attention. The WSDOT website also has extensive details on the Alaskan Way viaduct and seawall replacement project, which is the other factor influencing the need to mothball the streetcar service. According to the website, the viaduct replacement work would begin in 2009.

Update 10/18/05- The end to the maintenance building saga has finally arrived with the announcement that the line will close for 18-24 months on November 18, 2005. A press release from County Executive Ron Sim’s Office provides details of the proposed solution that will ultimately create a new maintenance facility in the Pioneer Square area. Buses will be substituted in the interim. Although the relatively small trolley facility will be removed, it is interesting to note that the busy multi-track BNSF railroad mainline will remain in place between the park and the water’s edge. The maintenance facility is located immediately west of the BNSF tracks (between the tracks and the water).

While it is good to hear that a solution has been worked out for the construction of a new facility, it certainly offers an important lesson to Vintage Trolley advocates about the need for multi-generational political support. Once a project’s original champion is gone- will it continue to receive the same level of political support? One is left wondering what George Benson’s views would have been on tearing down a perfectly functional maintenance facility (which was funded by Seattle taxpayers) without a replacement facility being ready. And all this in order to have better views within a sculpture park that is already bisected by a railroad mainline? Food for thought. 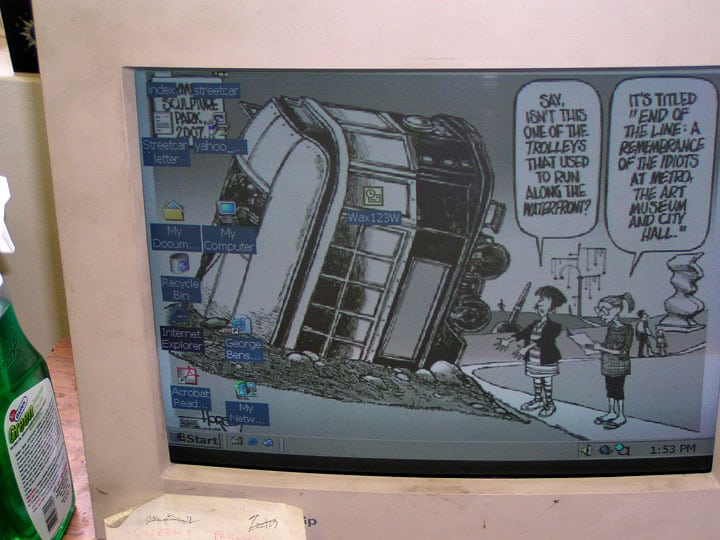 This political cartoon from a local paper became a screen saver inside the maintenance building during its final months. Not surprisingly, the decision to close the line was somewhat controversial amongst the regular operators and staff.

Update 12/1/06- One year after the line’s closure, plans for a new maintenance building have not yet come together. A June 29, 2006 article in the Seattle Times reported that the local developer who was to build the new maintenance building as part of a larger condo project, had pulled out of the deal. A November 15, 2006 article in the Seattle Times reported that the City Council was considering reallocation of the funds set aside for the new facility. Meanwhile, construction of the new Olympic Sculpture Park has transformed the former location of the maintenance building and is set to open in early 2007.

Update 12/13/06- A December 11 opinion piece in the Seattle P-I is urging the City to move forward with stalled plans for a replacement trolley barn. A December 7 article in the Seattle Times provided details of a new proposal from developer Greg Smith to develop a mixed use property in Pioneer Square with a trolley facility on its lower floor.

Update 11/2/07- Although there has been no word in recent months regarding the fate of the Waterfront Streetcar Line, the new South Lake Union streetcar line is preparing to open before the end of the year. Click here for a news article on the start of operational testing.

Update 10/08/09- Although the maintenance building is gone, virtually all of the other infrastructure remains in place. It appears unlikely, however, that the Waterfront Streetcar Line will be opening again anytime soon. On a recent visit to Seattle I took the opportunity to drive by the site of the former maintenance facility, as seen in the pictures below. 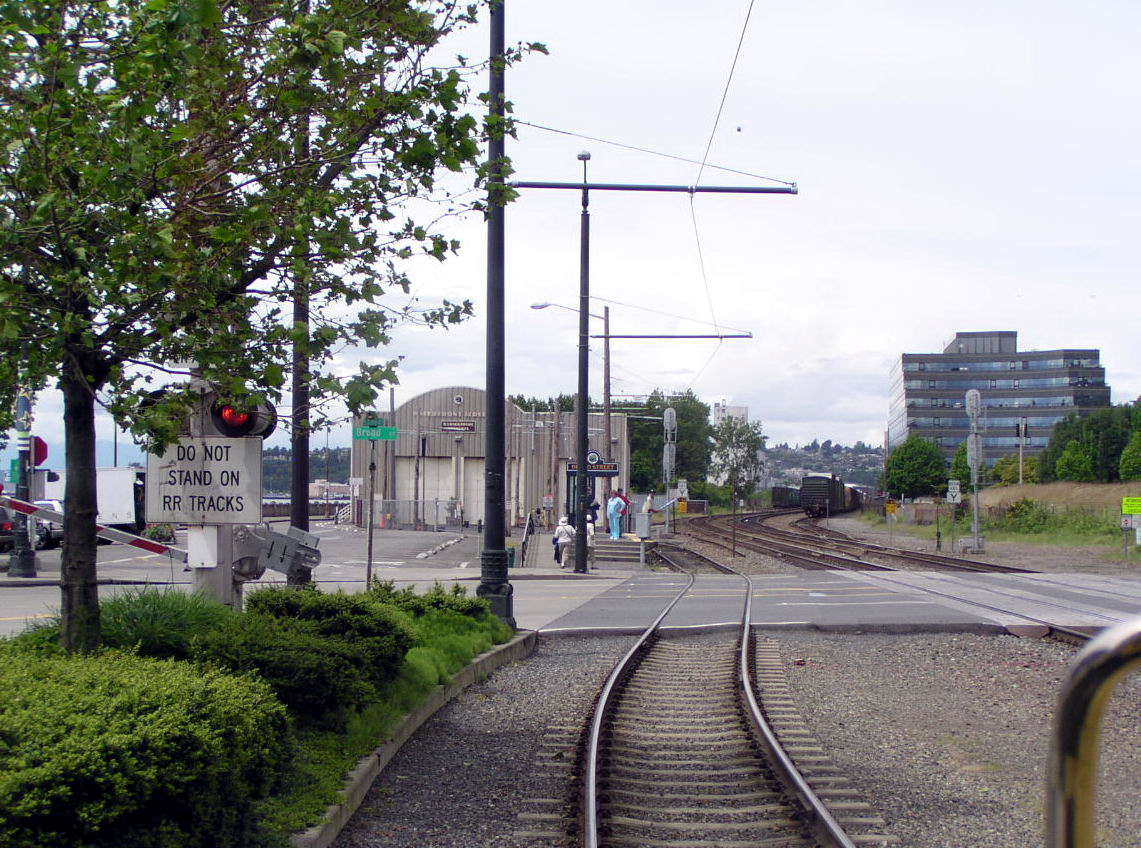 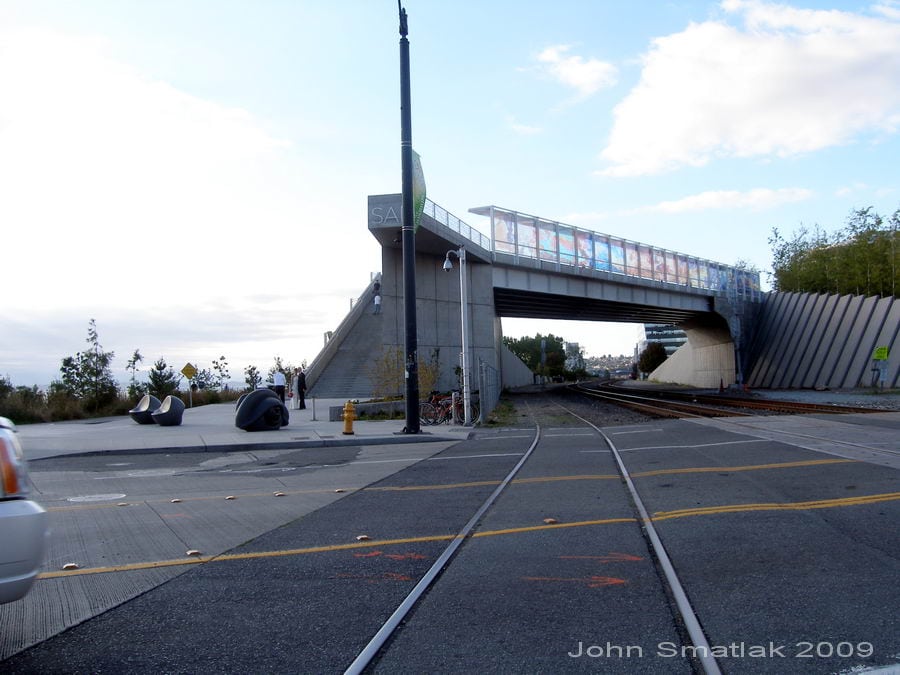 Essay by George Benson on the development of the Waterfront Streetcar