The City of Aspen for many years owned six narrow-gauge trolleys imported from Libson. Numerous proposals were aired over the years to establish a Vintage Trolley operation in the city. In 2001, the City Council acted to sell the cars, which had remained stored since their arrival in 1982. The move to dispose of the cars coalesced a local group into updating its proposal to restore the cars and create a half-mile operation in the City’s downtown area.

The group succeeded in getting a proposal on the November 2002 city ballot. The measure asked Aspen voters to grant rights-of-way for the proposed trolley line. Unfortunately, the ballot referendum failed by a 1,314 to 1,148 margin.

Following the election, the City of Aspen donated the six cars to new homes. Two cars went to Issaquah Washington, two cars to Tucson, Arizona, and two cars to Wanganui, New Zeland. The entire saga was well covered in the Aspen Times, and the following story links remain functional as of February 2003. 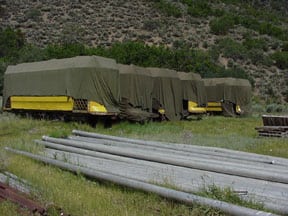