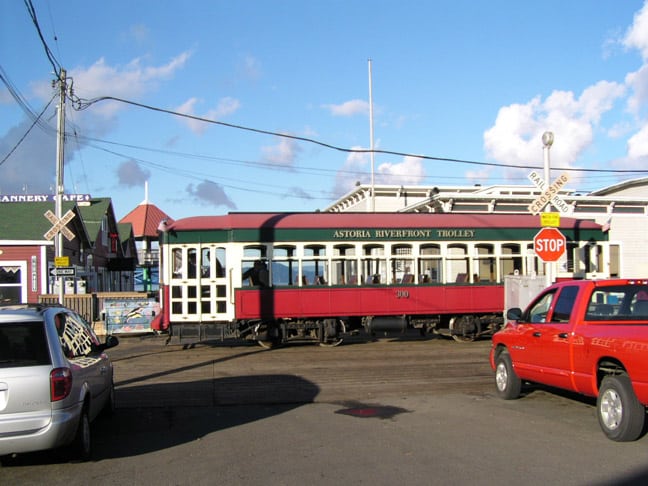 The City of Astoria owns approximately five miles of former Burlington Northern railroad trackage along its historic waterfront, and the non-profit Astoria Riverfront Trolley Association (ARTA) provides a Vintage Trolley operation along about three miles of it. In addition to the trolley, a paved “River Walk” has also been developed adjacent to the tracks, greatly enhancing the pedestrian-friendly environment. The number of hotels, restaurants, shops and other attractions has also been steadily increasing since the trolley service was inaugurated. The trolley operates daily for about 8 months of the year, and weekends only during the winter months. A one dollar fare is charged, and depending on the number of riders, a round trip generally takes about 35-40 minutes.

During 1999, the first year of operations, 25,000 passengers were carried, despite a shortened season. Ridership increased to about 30,000 in 2000. The line is operated with a tow-behind generator, and speeds are kept low to let passengers enjoy the ride and for general safety reasons in this pedestrian environment. Trolley stops have been developed in cooperation with the local business community. A standard waiting shelter design has been created, and in exchange for donating the cost of putting up the shelter, a number of local businesses have gotten nearby stops to help bring in customers.

The car is operated using a tow-behind generator, and there are currently no plans to install overhead wire. To their credit, the 60KW generator purchased by ARTA was obtained with the optional “hospital quiet” muffler package, making it noticeably quieter than your typical diesel generator.

Equipment: At this time, there is only one car in use. Car 300 originally hails from Texas, having been built in 1913 by the American Car Company for the San Antonio Traction Company. Following retirement in 1933, car 300 was placed on display outside a San Antonio museum, where it languished until 1981, when it was adopted and restored by local trolley enthusiasts. The restoration was aided by the availability of parts from the body of a sister car (reportedly No. 311), which had been in use as a local residence. Restoration included replacement of the original running gear with trucks from New Orleans that were converted to standard gauge, (San Antonio had an odd four-foot track gauge). Beginning in 1982, car 300 was operated on the Pearl Brewery trackage in San Antonio. After tourist operations over this trackage ended, the trolley found its way to Oregon on a lease, and was used for a time on the Willamette Shore Trolley operating out of Lake Oswego.

In 1998, ARTA obtained a lease on the car in exchange for the promise to refurbish it and keep it stored under cover. The car was extensively refurbished by ARTA volunteers, and was initially kept in a small makeshift shelter accessed by one of the many industrial sidings along the line. A dedicated maintenance building was opened in October 2001, and in 2005 the group purchased the trolley outright.

6/1/02- Steve Nurding of Astoria Trolley reports that the 2001 season saw over 30,000 riders, as well as the addition of a dedicated maintenance building for the trolley. The two-track metal building was opened in October and contains a full-length pit under one track, as well as an office, meeting/training room, and a restroom. The building is owned by the City of Astoria, and was funded by a state economic development grant and a loan to the trolley organization that is being repaid through operating income. A photo of the building appears above.

5/30/03- Laura Sellers-Earl of Astoria Trolley contacted us to let us know that the organization has a new website. Laura also reported that the trolley had a ridership of 30,000 in 2002 and that they hope to see an increase with the start of the new “Lewis & Clark Explorer Train” passenger service between Portland and Astoria. The train will operate May 23-September 2 using RDC equipment. 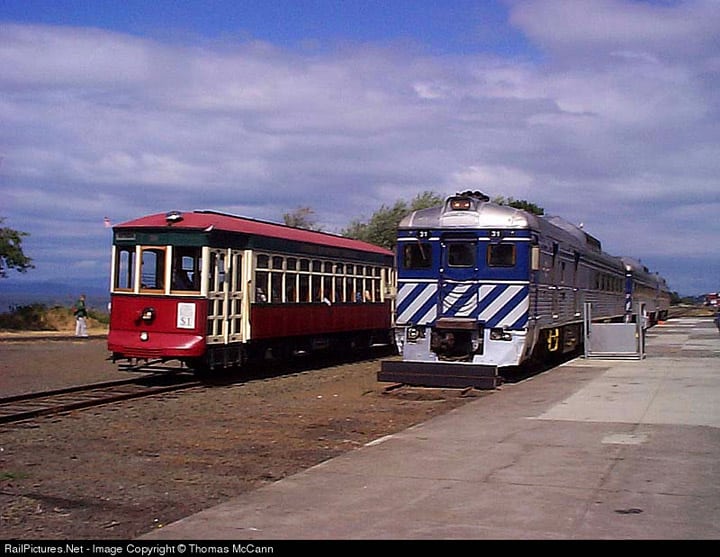 10/18/05- The Astoria Riverfront Trolley Association has made an outright purchase of Car 300 from the San Antonio Art Museum, from whom they had been leasing the car.