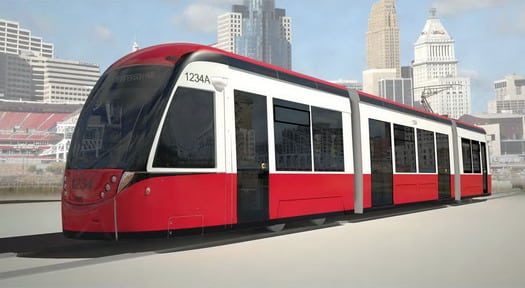 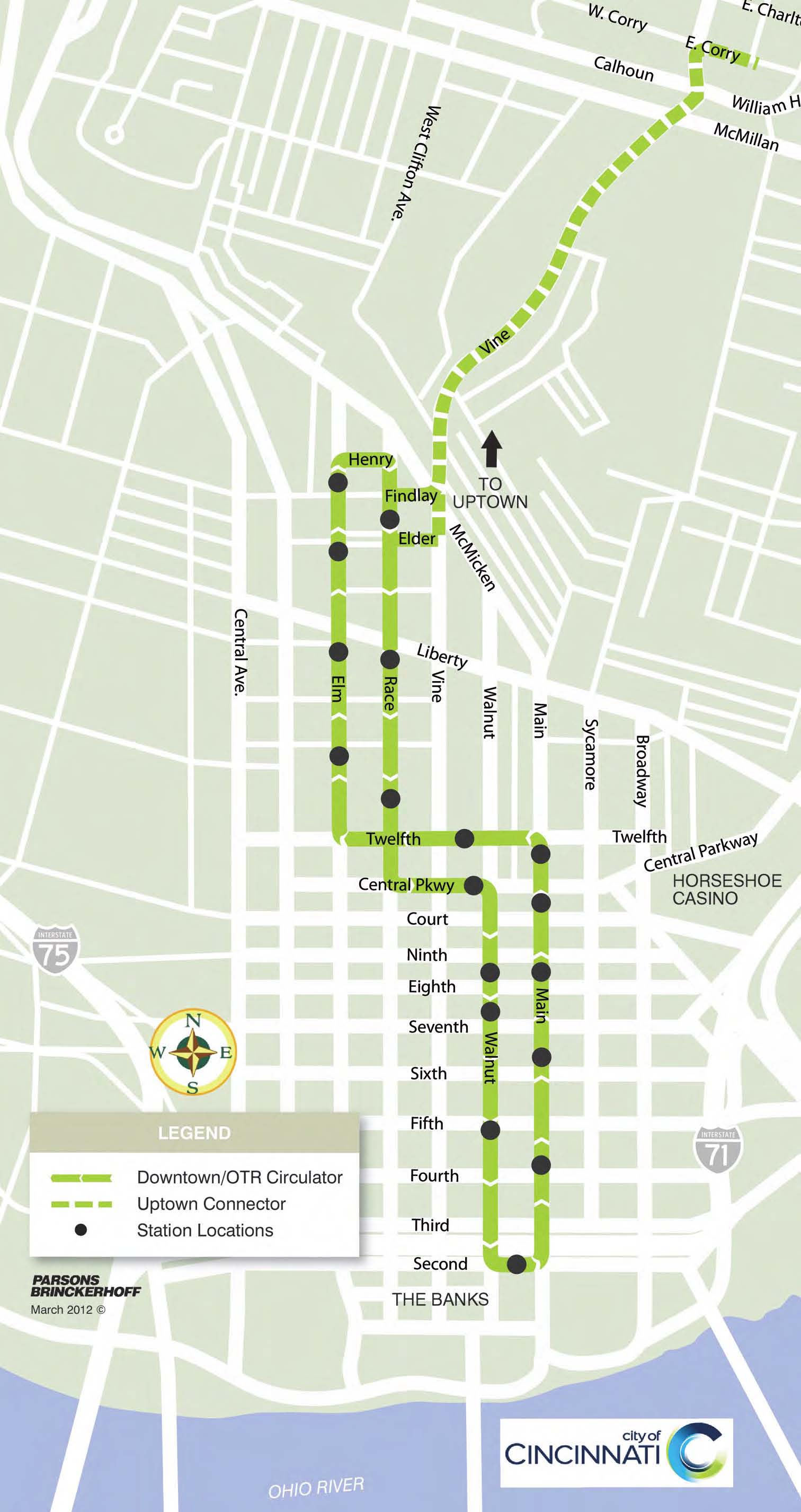 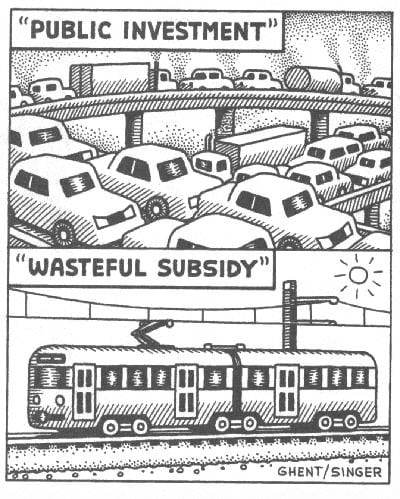 The political cartoon above appeared on Cincinnati’s ProTransit.com website.

The City of Cincinnati is constructing an exciting new streetcar project intended to ultimately connect its two largest employment centers in a six mile corridor between Downtown and Uptown. Phase One of the project will build a 3.6 mile line in the Downtown and Over-the Rhine areas, operating with four modern streetcar vehicles. The project broke ground in February 2012, and is anticipated to begin service in 2014. Additional information is available on the City’s website, including a series of videos detailing construction progress.

The project is a fascinating case study in how local politics can impact transportation investments, leading a roller coaster existence in the years leading up to its 2012 groundbreaking. The summary below tracks a few of the highlights, with more details and latest developments found on the CincyStreetcar blog.

Building on earlier grass-roots efforts (see below) the Cincinnati Streetcar Development Group was formed in about 2005 to help coalesce local support for the streetcar concept. In January 2007, the City conducted an in-depth feasibility study. Encouraged by the results of this study, the City Council voted later that year to support continuing to study the idea. In March 2008, the scope of the study was expanded to include additional environmental work. In April 2008 the Council approved a proposed 4-mile route. During the summer of 2008 the City hosted a streetcar forum and in August the University of Cincinnati released its independent review of the consultant study. In late 2008, the City issued a Request for Qualifications for firms interested in bidding on a Design / Build / Operate / Maintain (DBOM) contract for the streetcar’s first phase.

In June of 2009, the City selected Cincinnati Streetcar Development Partners as the DBOM manager. However, just as this project milestone was being realized, a local opposition group gathered enough signatures for a ballot referendum that would require specific voter approval for any form of passenger rail investment. Following a contentious debate, the referendum was defeated in the November 2009 election. In July 2010, the City received a $25M federal grant toward the project, and the following month the City Council authorized moving ahead with $44 million in grants and $64 million in bonds that will finance most of the line’s $128 million first phase. However, in April 2011, the State of Ohio withdrew $52 million promised by a previous administration. The project was subsequently shortened from to the current 3.6 mile phase one.
In November 2011, a second ballot referendum designed to scuttle the project was defeated, and a larger pro-streetcar majority elected to the City Council. The City received an additional $10.9M in federal funding in the form of a TIGER III grant in December 2011. Additional controversy erupted over utility relocation costs, but the project did enter construction in February 2012. In April the city announced the selection of carbuilder CAF to supply the line’s five new streetcar vehicles.

Some History on Prior Streetcar Efforts in Cincinnati:

As with most trolley / streetcar projects, local efforts to create a workable plan have been years in the making. Prior to the formation of the Cincinnati Streetcar Development Group, a streetcar project was championed by the nonprofit Cincinnati Street Railway (CSR). The group was founded in 1987 to serve as a catalyst in bringing an historic streetcar system back to Cincinnati and Northern Kentucky. The organization met with anyone who would listen to the streetcar story. CSR laid out possible routes, looked for cars and began to seek funding.

The group originally envisioned a riverfront line connecting the new football and baseball stadiums. As the plans evolved and a rebuilt riverfront freeway started to take place, including a transit center for light rail, the focus changed to being a feeder to the light rail system. At about the same time, the Ohio Kentucky Indiana Council of Government (OKI) secured funding for a feasibility study for a loop system connecting downtown Cincinnati with Covington and Newport across the Ohio River in northern Kentucky.

The “Loop Study”, which began early in 2001, studied monorail, personal rapid transit, light rail, streetcars and buses. The Central Area Loop Study, as it was known, concluded in October 2001 that any further study of monorail and PRT in the urban cores of Cincinnati, Covington and Newport should be eliminated. Any additional study of surface alternatives should be conducted and incorporated as an integral part of the proposed Regional Rail Plan. This left the use of light rail, streetcars and buses as alternative systems.

A Regional Rail Plan study was also conducted using streetcars, Light Rail and heavy commuter rail. The light rail route from the riverfront originally was planned to traverse city streets in the Cincinnati core area and involve a new tunnel under Mt. Auburn to reach the University of Cincinnati area. Subsequent study now suggests utilizing an abandoned Pennsylvania RR right of way on the east side of Cincinnati’s Central Business District for a route that would proceed northward, generally following I-71. A branch of this route would continue west and north utilizing an unused subway tunnel located beneath Central Parkway.

As a result of these decisions, streetcars were very much back in the picture. Routes beginning on the riverfront would follow city streets in Northern Kentucky and in Cincinnati’s core area. The routes would connect the core area to the University of Cincinnati and the nearby hospitals. Also in the loop could be the Cincinnati Zoo, Museum Center (formerly the Union Terminal) and other trip generators. Connections could be made to light rail Stations feeding into them taking riders to various locations.

April 2011- The city announced that carbuilder CAF has been selected to provide the lines five streetcar vehicles. Renderings of the vehicle were posted on the project website.

August 2010- The Cincinnati City Council has authorized moving ahead with $44 million in grants and $64 million in bonds that will finance most of the line’s $128 million first phase.

July 2010- Cincinnati has received a $25M federal grant towards its streetcar project.