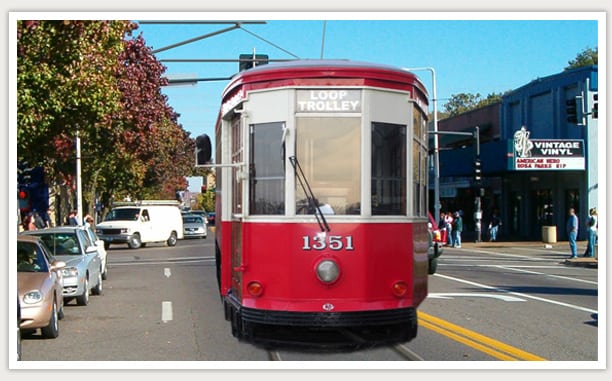 The 2.2 mile St. Louis Loop Trolley will use vintage trolleys to connect the Delmar Loop neighborhood with the Missouri History Museum. Backed by $25 million in federal funding received in July 2010, groundbreaking is expected in 2013, with trolleys rolling in 2014. The project is currently budgeted at $43M.

The 2.2 mile route will have nine stops, including the Forest Park and Delmar MetroLink stations; Crossroads College Preparatory School; the Pageant; the Tivoli Theatre; and the Market In the Loop. The trolleys will run in both traffic lanes of Delmar west of the old Wabash train station / Metrolink station. East of this point, the alignment will transition to single track in the median of Delmar (where there is an existing landscaped median). A single track alignment will also be used on DeBaliviere, which will be reconfigured from four lanes to two. Traffic will be moved to the west side of the street, while the trolley alignment and a greenway for bicycles and pedestrians will be constructed on the east side. 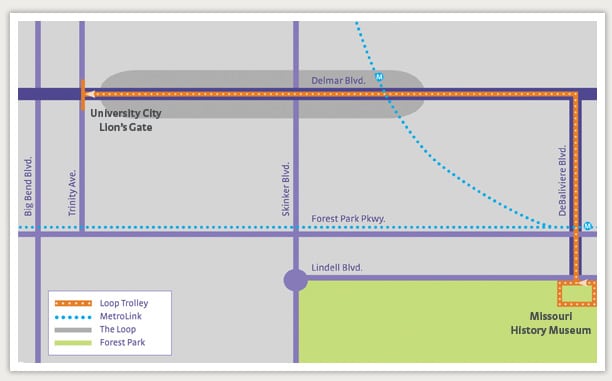 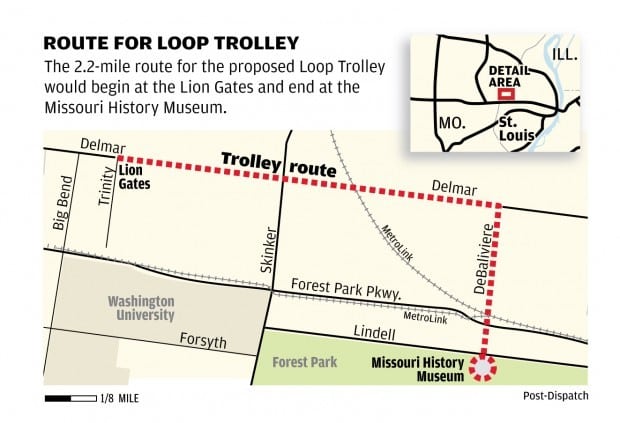 The trolleys were originally proposed to be hybrid-electric models, utilizing battery power west of the Wabash station. The project timeline, along with the additional costs and technical issues, ultimately led to a decision to adopt conventional overhead wire for the entire alignment.
The vehicles will either be restored original heritage cars or possibly new replica vehicles.

History of the Loop Trolley

In 1997, a community planning group engaged in a collaborative process with the City of St. Louis, University City, and Metro to explore ways of cultivating development around the Delmar MetroLink Station, an area of pedestrian concern. Joe Edwards, owner of Blueberry Hill and staunch promoter of The Loop revitalization, suggested that the streetcar system that once built the area and gave The Loop its name could help attract the development needed to extend the Delmar Streetscape and link the Delmar Station to The Loop.

Metro helped finance a $200,000 feasibility study that estimated the cost of a new streetcar system in 2000. The study, completed in December 2000, suggested that an electric trolley line was indeed feasible and even more efficient and effective than a system of buses disguised to look like trolleys. While a fixed track system would cost more to build, the operating costs of a fixed track versus a rubber tire system were almost identical. The study showed that the fixed track system offered long-term viability, with a 70% higher ridership than the rubber tire system.

Citizens for Modern Transit (CMT) along with Joe Edwards and others created the non-profit Loop Trolley Company (LTC). CMT secured a grant from the East-West Gateway Council of Governments and the Missouri Department of Transportation to purchase and renovate two historic vehicles for the new line. The renovation is complete and the cars are currently on display in front of the Missouri History Museum and Commerce Bank in The Loop. A preliminary engineering study wrapped up in January 2010, and the Loop Trolley Company continued its efforts to seek federal funding for the project.