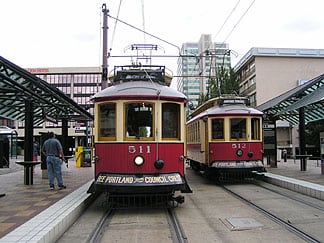 Since 1991, Portland’s Tri-Met has provided part-time vintage trolley service as an historic supplement to its Light Rail system. Until 2009, trolleys operated along a two-mile portion of the system between downtown Portland, and the Lloyd District, a “second downtown” office and shopping district across the Willamette River. Daily service was originally provided from May through December, but this was scaled back as additional light rail lines opened and added additional traffic to the original corridor. In recent years, two cars have been operating on a seasonal Sundays only schedule. In 2009, the operation was moved to the new transit mall tracks that connect Portland Union Station with the Portland State University campus.

A separate non-profit corporation, Vintage Trolley Inc. (VTI), was created to provide policy direction and to coordinate funding support for the trolleys. VTI provided an entity in which public officials, the business community, and private individuals could work together in a coordinated fashion with each group contributing the type of funding and expertise of which it is most capable or qualified. Local merchants and other financial supporters had the opportunity to sponsor cars, which then receive the sponsors name on the sides. VTI also recruited, hired, trained and supervised the on-board conductors. Attired in authentic uniforms, the conductors interact with passengers in addition to performing traditional duties like announcing stations and operating the doors. Operators for the cars have always been provided directly by Tri-Met.

Equipment: The four replica trolley cars were built by the Gomaco Trolley Company in 1991, and are a modified copy of a locally famous streetcar design known as the “Council Crest car”. The attractive wooden exterior of the cars provide an appropriate period look, but the cars are quite a bit more agile than your average vintage trolley. Designed for operation in the light rail environment, they feature rapid acceleration and braking in order to operate between runs on the regular LRV schedules. The cars are also equipped with the Tri-Met’s standard Automatic Train Stop and wayside communication systems.

For several years, the City of Portland’s Portland Streetcar, which opened in July 2001, used two of the vintage cars for service on that line.

Other Portland Area Trolleys: A group of local agencies also owns a 5.6 mile railroad right-of-way along the Willamette River’s western bank between Portland and Lake Oswego. The line was purchased in order to permit future transit use, and is kept active via a weekends-only Vintage trolley operation. Known as the Willamette Shore Trolley, the operation is contracted to the Oregon Electric Railway Historical Society, which also operates a trolley museum at nearby Brooks, Oregon. The line offers weekend excursions using a tow-behind diesel generator for power.

Update 4/3/01- Replica Cars Begin Testing On New Route- On March 18 a test run was made on the 2.4 mile Portland Streetcar line using one of the Gomaco replica cars.

Update 7/27/01- The new Portland Streetcar route began operation on July 20. Although it is not a vintage trolley line, it has many similar characteristics and two of the Gomaco vintage trolley cars have been assigned to the route for weekend operations.

The new “low cost” line features all street-running track, and made extensive use of minimal impact “shallow slab” construction. Details on the track construction technique are available from an interesting article on the Gomaco World web site.

Update 12/3/03- The APTA Heritage Trolley & Streetcar Task Force held its Fall meeting in Portland /Tacoma on November 19. The group traveled by train from Portland to Tacoma to visit the new city streetcar system there and were treated to a guided tour of the system. Upon return to Portland, a working meeting of the Recommended Practices group was held, making additional progress on a draft safety standard for vintage trolley vehicles.

On 11/20, a group of us visited the three Libson streetcars being offered for sale by a private party in Portland. The cars were imported in 1974 and have been stored indoors ever since. The cars are detailed on the 3trolleys.com website, and their condition appears to be excellent. The three cars are, however, 900mm narrow gauge, and so any potential purchasers will have to either consider a narrow gauge system or re-gauge the cars.

On Saturday 11/22, I had the opportunity to ride one of the Gomaco replica trolleys on the Portland Streetcar route, some photos of which follow. On weekends one of the replica cars replaces one of the modern streetcars in the lineup and offers passengers an enhanced sightseeing opportunity. One of Vintage Trolley Incorporated’s volunteer conductors provides a running narrative as the car travels along the route. The conductor is stationed on the rear platform, and greets everyone as they come aboard, answers questions, and generally does a nice job of serving as a host.

The development along the route of the Portland Streetcar is truly phenomenal- major changes were evident since my last visit two years previous. The system is also being extended once again. The September issue of Rail Transit Online provided this report:

2/3/04- The February 2004 Rail Transit Online contained news relating to Portland’s other Vintage Trolley operation, the Willamette Shore Trolley. The WST has kept the line active since it was purchased from Southern Pacific in order to maintain the possibility of future transit use.

A preliminary internal study just released by TriMet shows streetcars, rather than light rail, would be the best transit solution to connect Portland with nearby Lake Oswego. The project could be completed for about $70 million, according to the study, utilizing an existing 5.6 mi. (9 km) former railroad right-of-way along the Willamette River’s western bank between Southwest Bancroft Street and the center of Lake Oswego. The cost estimate includes the purchase of four new streetcars. The Willamette Shore Trolley already operates on the line with vintage streetcars using a towed generator. The 10-station route would connect with a proposed extension of the Portland Streetcar into the North Macadam Urban Renewal Area. “A number of us have gotten very excited about using this alignment for a streetcar line,” TriMet General Manager Fred Hansen told The Oregonian. A trip from downtown Portland would take about 25 min. and cars would run on a 12-min. headway during rush hours. The ROW is already publicly owned and infrastructure is in generally good condition. A more detailed $300,000 analysis is scheduled to get underway this fall. The line was once electrified and, until service stopped in 1929, saw an intense passenger service operated by Southern Pacific. Source: Rail Transit Online

September 2010- A visit to Portland by the New York Electric Railroader’s Association provided some good pictures by Bob Vogel of the city’s newly configured Vintage Trolley operation (see photos below. September 13, 2009 had marked the inauguration of Vintage Trolley service on the new downtown Transit Mall running between Union Station and Portland State University. Trolleys share tracks through downtown with the new Tri-Met Green and Yellow Lines. The more intense use of rails across the Steel Bridge that resulted from the advent of those additional light rail routes brought to a close Vintage Trolley’s original line (1991-2009) linking downtown with Lloyd Center. The last day using the old route between Lloyd Center and Galleria was August 23, 2009. Trolleys run from 10:33 a.m. to 5:44 p.m., Sundays only, using one of two cars (Nos. 511 or 512). A roundtrip between Union Station and