U.S. Streetcar Systems- Texas – Forth Worth 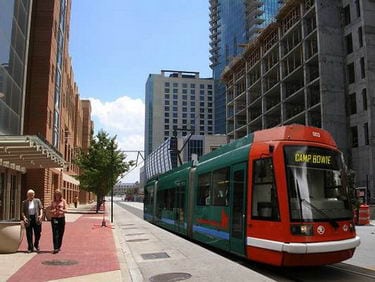 In December 2008 an 18-member Streetcar Study Committee completed a comprehensive plan for financing and building a 12-mi. (19.3 km), three-route downtown streetcar system. The project could be completed in five years and would cost around $250 million, but some funding sources have yet to be identified. The committee’s December 2008 City Council presentation can be found on the City’s streetcar web page.

In addition to analyzing the physical characteristics of various route concepts, the evaluation criteria included consideration of employment sites and other trip generators, current bus ridership in the same corridor, projected population and employment density, as well as development and financing potential.

The initial routes would include:
• A downtown loop;
• West Seventh Street to the Will Rogers Center and the University of North Texas campus;
• South Main Street with spurs to Evans Avenue and Rosedale Street and to the medical district along Magnolia and Eighth avenues.

Subsequent lines would be built further along East Rosedale and on North Main Street to the Stockyards. About $89 million of the capital cost would be generated by existing tax increment financing districts, supplemented by the downtown improvement district. Another $97 million would be contributed by the city of Fort Worth, Tarrant County, gas well revenue and hotel taxes, leaving a $64-million gap.

There is strong political support from local elected officials who have already visited streetcar operations in Seattle, Tacoma and Portland. In April 2009 the proposed streetcar was officially added to the Fort Worth / Dallas region’s Mobility 2030 plan, an important step towards eligibility for federal transit funding: Additional information on the proposal can be found via the links below.

December 2010- Streetcar Plan Shelved. Fears among Fort Worth City Council members about capital and operating costs have stalled planning for a proposed downtown streetcar circulator and may have killed the project altogether.

On Dec. 7 the council voted 5-3 not to proceed with the final phase of a three-part feasibility study of a two-segment line totaling about three miles (4.8 km), connecting downtown with the near north side and the near south side. The study would have taken a year and included an environmental review; only then would a decision have been required to proceed with construction. The estimated price tag is $88 million, $25 million of which would be covered by an already-approved federal grant. The remainder would have to come from two tax increment financing districts.

“This has been a real struggle for me,” Mayor Mike Moncrief told the Star-Telegram. “The bottom line is, many of us are still wrestling with concerns over funding.” Operating subsidies were projected to be $1.6 million annually which would initially be provided by the Fort Worth Transportation Authority.

Consultant HDR Engineering found that streetcars were viable for the city and would attract $334 million in new residential and commercial development. But critics were skeptical of the projections that came out of the first two phases of the HDR study. Proponents have vowed to continue pushing the scheme, noting that if the council doesn’t reconsider, the federal grant will be rescinded and the money sent elsewhere. Source- Rail Transit Online

Fort Worth page on the APTA Streetcar Subcommittee website