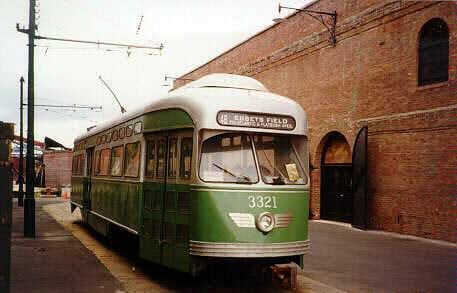 Not all vintage trolley proposals are successful. Sometimes local politics present obstacles to implementation. The Brooklyn Heritage Trolley Project provides an interesting case study. An enthusiastic non-profit organization was able to acquire vehicles, track and related equipment, but was unable to successfully complete the transition into a working trolley line. In 2003 they pulled the plug and the project lay dormant into 2010. During this time a new heritage trolley project emerged. Read more in the “Updates” below. The original project summary remains in the next few paragraphs, although this into is now out-of-date.

The non-profit Brooklyn Historic Railway Association (BHRA) is pursuing construction of a downtown historic trolley loop, to be operated using restored PCC cars. In 1998-99, the group created a 3/8 mile “demonstrator” line on private property in the Red Hook neighborhood of Brooklyn. This initial line, which is located adjacent to an historic 1870 warehouse pier, has allowed BHRA to conduct occasional operations as the group lobbies to extend the line into the streets of Brooklyn.

In 2000, permission was received from the City of New York to extend the line another 1/2 mile, and the NYC DOT served as a sponsor to obtain ISTEA funding for the extension. A Federal allocation of $209,970 has been obtained, along with a $52,493 local match. BHRA is to provide additional materials and volunteer labor, for a total project cost of $328,463. BHRA hopes to begin construction of the additional trackage in the Fall of 2001. Future plans include extending the line a total of about 1.5 miles into Downtown Brooklyn and through the 1844 Atlantic Avenue Tunnel.

BHRA already owns a variety of rolling stock. To begin, there’s an 1897 single truck car from Oslo, Norway, and three picture window PCCs from Boston. In March 2001, BHRA purchased a dozen PCCs from the City of Buffalo, who had in turn acquired the cars some years ago from Cleveland for use on a possible low-cost line extension. These cars are currently in storage at the Brooklyn Navy Yard (Ed. note: these cars have been scrapped) 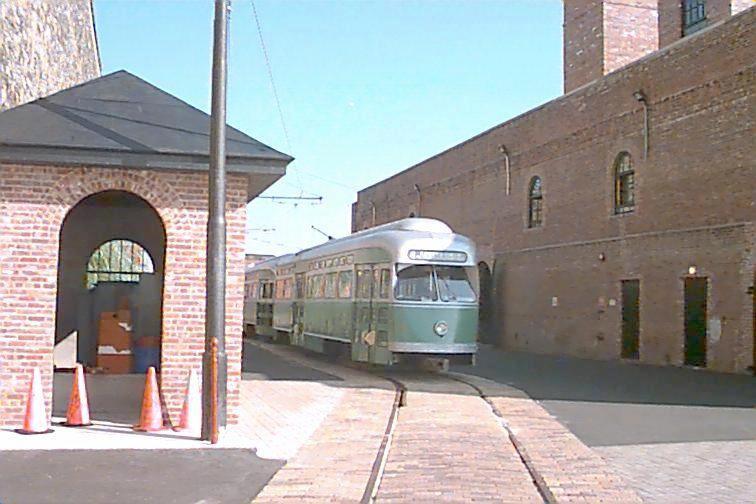 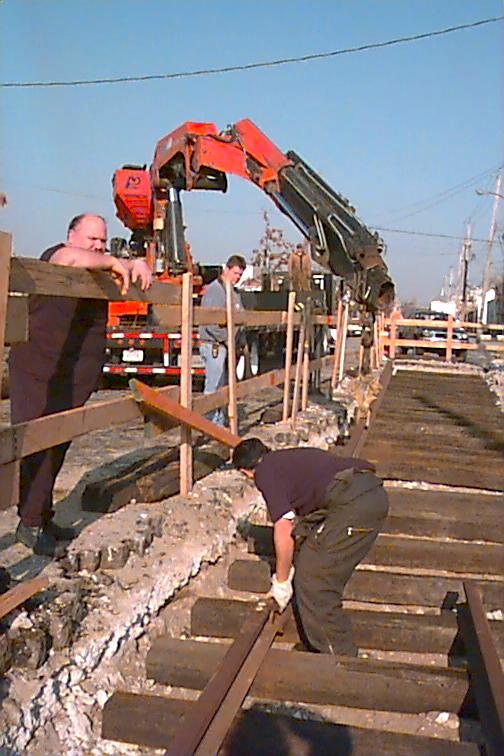 9/01: With the Williamsburg Bridge and the Empire State Building visible in the background, this lineup of recently acquired PCCs is in storage at the Brooklyn Navy Base. BHRA acquired the twelve cars from Buffalo, New York. John Smatlak photo.

12/01: Construction of an additional 3/4 mile of street trackage began in November. The project is being funded with a TEA-21 grant, with the BHRA providing materials and labor. This exciting news came on the heels of a near disaster; on September 7th, an errant tugboat rammed the historic pier where the group’s carbarn is located, causing significant damage to the pier itself as well as the trackage and overhead wire in the area in front of the carbarn. Quick action was required by BHRA members to rescue a PCC car stored near the edge of the pier. Fortunately, the pier has been stabilized, and repairs are scheduled for Spring 2002. In the photo at left, BHRA members are at work on the new trackage. BHRA photos, click any image to enlarge.

04/02: Work on the new trackage is presently on hold, awaiting resolution of funding issues. BHRA is hopeful that construction will resume within the next few months. The group has also debuted a new web site.

6/10/02: Brian Kassel of BHRA reports that construction resumed in late May on the new street trackage, with completion of the first phase expected by late August.

5/30/03: Future of Trolley Project in Doubt. Building a working heritage trolley is certainly a complex endeavor, and many projects have experienced major obstacles on the road to implementation. The Brooklyn Heritage Trolley Project is currently facing some tough times. The “What’s New” section of their website details the latest developments- an eviction notice from their landlord and the New York DOT reclaiming rail and other construction materials. Source- BHTP

9/9/10: Return of the Brooklyn Streetcar Project? It now appears that there may still be life in the Brooklyn streetcar concept. The Brooklyn Daily Eagle also ran this story. BHRA has also added a webpage offering an overview of the “new” project.

Photos of the project area in 2009