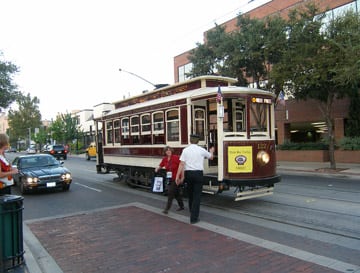 The McKinney Ave. Trolley is a remarkable story of public/private cooperation. The line connects the Arts District adjacent to Downtown Dallas with the shops and nightlife of the Uptown neighborhood. The entire line utilizes city streets, and the operation runs like a real city streetcar, providing transportation for sightseers and local residents alike. The majority of the line is double-tracked, with a loop arrangement on one end, and a section of single track on the Downtown end. The operation unites a dedicated group of trolley enthusiasts with the local business community, who together have received strong backing from the City of Dallas.

The origins of the line are traced back to the early 1980s and the idea of a local restaurateur to operate trolleys using original trolley tracks still intact under layers of paving along McKinney Ave. In 1983, the non-profit McKinney Ave. Transit Authority (MATA) was founded and began to pursuing funding and acquiring suitable rolling stock. In the summer of 1984, the city of Dallas endorsed a 1.9 million dollar plan for a 1.3 mile line, which included $200,000 from the City, $400,000 from local merchants, and 1.3 Million from UMTA. As the project progressed, it increased in scope to a 2.8 mile line with a 5.9 million dollar price tag. Ultimately, local businesses and other supporters contributed 3.25 million to the project, and UMTA provided two grants totaling 2.5 million.

To operate the service, MATA acquired two relatively complete cars, one from Portugal and the other from Australia, and also restored two Dallas carbodies. Daily service was inaugurated in 1989, and the line’s initial months of operation were extraordinarily successful. However, a downturn of business after the initial wave of enthusiasm forced the MATA to devote more resources to the important business of marketing their new line. This began a successful collaboration with the convention and tourist agencies of the area, and with businesses along the line.

The higher than anticipated costs of operating the system also made for a rough financial ride after the initial ridership surge was over. Originally operated with a paid staff, In 1991 operation of the line was turned over to a supporting non-profit group, an arrangement which exists today. The line today has a paid Chief Operating Officer, and a paid office manager, with all other positions filled by volunteers. To help provide continuing support and reinforce their ties to the local business community, a local Public Improvement District was incorporated, providing MATA with an additional $150,000 in annual support.

In 1996, Dallas opened its new Light Rail system, and MATA began planning for expansion projects which would connect both ends of the vintage trolley service with light rail stations. The northern expansion opened in June of 2002, at which time MATA began operation as Dallas Area Rapid Transit’s (DART) “M-Line Streetcar”, offering free shuttle service seven days a week. The new operation is underwritten by DART, as well as the Uptown and Downtown Public Improvement Districts.

Construction of a new extension on Olive Street at the southern end of the line began in 2012. This long-sought extension will reach a nearby Light Rail station, tying both ends of the system in to the DART rail system, further enhancing its effectiveness as a circulator. Additionally, two other streetcar projects are in the planning stages in Dallas. DART is studying the addition of a new downtown streetcar line that will connecting to the MATA line. The Oak Cliff neighborhood is also studying a new streetcar line. 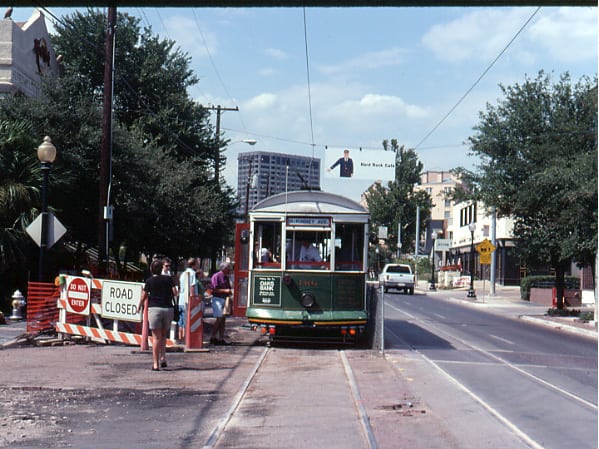 1/5/01: On January 4, the McKinney Ave Transit Authority operated an opening parade to celebrate restoration of normal 7 days-a-week trolley service on McKinney Ave. Service on the line had taken on several interim forms during the lengthy street construction project, which started in July 1999 and involved extensive storm drain, street paving and track work. In other MATA news, it is expected that work will begin on January 22, 200l on the new extension to City Place and the DART light rail line. Plans call for cars to be running on the new extension by December 2001. Sources: Harold Geissenheimer, MATA web site. Photo: service during reconstruction, summer 2000, John Smatlak.

1/5/01: On January 4, the McKinney Ave Transit Authority operated an opening parade to celebrate restoration of normal 7 days-a-week trolley service on McKinney Ave. Service on the line had taken on several interim forms during the lengthy street construction project, which started in July 1999 and involved extensive storm drain, street paving and track work. In other MATA news, it is expected that work will begin on January 22, 200l on the new extension to City Place and the DART light rail line. Plans call for cars to be running on the new extension by December 2001. Sources: Harold Geissenheimer, MATA web site.

6/8/01: Construction of the new extension to City Place began on March 22, 2001. More information is available on the MATA web site and on the Light Rail Now! web site, which has an very good article from the Dallas Morning News covering the start of construction. The extension will feature an operating turntable at the end of the line, which will be used to turn the single-ended ex-Toronto PCC cars that will ultimately be added to the operating fleet.

7/10/01: The MATA web site has been updated with photos and news of the new trackage being installed to serve the Cityplace DART station. Source: MATA web site

11/01: A meeting with MATA Chief Operating Officer John Landrum at the Association of Railway Museums convention in North Carolina offered an opportunity to view an excellent promotional video produced by MATA detailing the new line extension to the Cityplace DART station. Opened in December, 2000, Cityplace is DART’s first underground station; the tri-level facility is situated 10 stories below the North Central Expressway. The short video features appearances from, among others, the Mayor of Dallas and the President of DART, all extolling the virtues of MATA and its increased integration into the City’s transit scene. The video is really quite a model for such promotional efforts.

John also provided an update on the progress on the line extension, anticipating an opening in early 2002. Initially, the line extension will begin operation without use of the turntable planned for the Cityplace transit plaza. The turntable construction is being integrated into the larger construction project at the site, with DART serving as construction project manager. Additional information on the Cityplace station, and all of the development taking place around it, can be found on the DART website.

Finally, John clarified that MATA’s PCC-type cars (noted in our 6/8/01 update) aren’t planned for use until the West End extension comes on line.

05/02: Congratulations to MATA on their 13th anniversary and the impending opening of their new 1.25 mile line extension. Their website carried this report:

On April 13, 2002 MATA celebrated its birthday and “almost grand opening” of the Cityplace extension. Because excessive Spring rains had delayed construction, there were still some gaps in the new route on McKinney Avenue. So, proceeded by a flag man, Rosie (122) and Petunia (636) ran the wrong way against traffic down Cole Avenue to Blackburn to Cityplace Blvd. On arriving at the party site, Rosie was put on display at the end-of-track. Then, for the duration of the event, Petunia provided free rides up and down Cityplace Blvd. The boulevard itself was lined with tents housing a potpourri of attractions including merchandise vendors, refreshment stands and live entertainment. It was a family affair and a play area was provided for the children.

Although the party was supposed to last until 7 PM, a heavy rain blew in about 2:30 and put an end to all outdoor activities. The circus, that had started at 1 PM was temporarily delayed for 30 minutes. The guests were evacuated to DART’s subway station until the wind calmed down. Fortunately the tent weathered the storm and the show was able to continue. Even though not everything went as planned, MATA put “its best foot forward” and provided the public a good time and a sneak preview of things to come when our entire extension opens in May. Thanks to everyone who participated in MATA’s biggest birthday party ever!

10/02: MATA hosted the annual convention of the Association of Railway Museums on October 24-27. Participants had an opportunity for an up-close look at the new line extension and all of the new construction in the adjacent neighborhood around the Cityplace end of the line.

12/06: MATA set a new ridership record in 2006, exceeding the previous year as of early December, with ridership (year to date) of 209,000 passengers. The MATA website also reports that in November, Dallas voters approved Proposition 1 of the Dallas Bond Package. This proposition will provide money for citywide transportation improvements including MATA’s Olive Street extension to the DART Transit Mall.

6/08: The Spring 2008 edition of MATA’s newsletter brings the good news that ridership increased to 250,924 passengers in 2007. The newsletter also reports that engineering work is underway for the long-sought extension on Olive St. to reach the nearby DART light rail station. The extension will provide MATA with closer access to the CBD and even better connections to the city’s light rail network, further enhancing its role as a local circulator system. In addition to the ongoing work on the expansion of the McKinney Ave. trolley, DART has also proposed a modern streetcar line in Downtown Dallas.

11/09: In September, MATA celebrated its 20th anniversary with a parade on McKinney Avenue. MATA set a new ridership record in 2008 with a total (excluding charters) of 291,106 riders, an increase of 40,000 over 2007 figures. Meanwhile planning continues on the extension to bring the M-line to connections with DART light rail stations at both ends of its line.

May 2010: Bid opening for the City of Dallas’ McKinney Ave. Trolley Olive Street Extension was scheduled for May 6. the long-sought extension on Olive St. to reach the nearby DART light rail station. The extension will provide MATA with closer access to the CBD and even better connections to the city’s light rail network, further enhancing its role as a local circulator system.

July 2010: The City of Dallas was awarded $5M for the extension of the McKinney Ave. Trolley (described in the updates above). The Dallas Observer carried a Blog about the recently received grant and the small celebration that was held.

September 2010: On August 25, the Dallas City Council approved an $8.4 million contract, largely from bond funds, to help pay for construction of the long-awaited extension of the McKinney Ave. Trolley.

August 2012: The new turntable feature at the end of the City Place spur opened in December 2011. The APTA Streetcar Subcommittee visited MATA in June 2012, in conjunction with the APTA Rail Transit Conference. Attendees rode one of the newly air-conditioned trolleys (a real blessing in the oppressive summer heat), and checked out the new turntable.