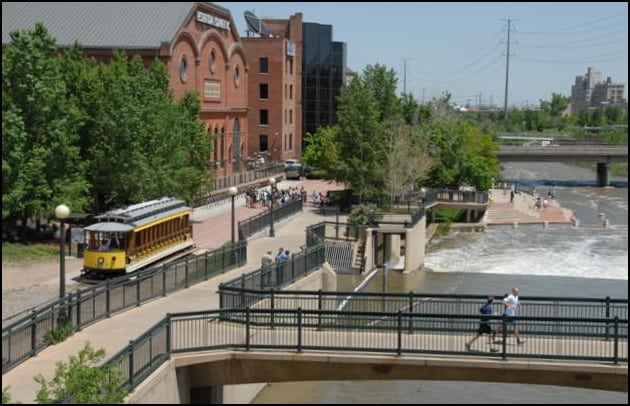 The Mile-High City has both an operating heritage trolley line and a developing concept for a modern streetcar line.

The Platte Valley Trolley offers a pleasant excursion ride along the Platte River, paralleling a jogging and bike path for much of its run. The line is operated by the non-profit Denver Rail Heritage Society using a Gomaco-built replica of a New England open-air trolley car. The group operates the excursion over a 1.5 mile section of former Burlington Northern railroad, no longer used for freight service, as well as a 2 mile section of former electric interurban track. The trolley has a built-in diesel generator that powers its electric motors, and the line has no overhead wire.

The entire right-of-way is owned by the Denver RTD, who acquired it in the 1980s for possible future transit use. RTD has been very supportive of the Platte Valley Trolley project, and has even assisted with track improvements. Long-range plans hold the possibility that this rail corridor may become part of Denver’s new Light Rail system, but for now the Platte Valley Trolley is the only thing polishing the rails.

Between April and October the trolley operates on Friday through Sunday on a 25 minute, 1.5 mile route along the South Platte River from 15th Street, through Confluence Park to West Colfax Ave. Stops include the Children’s Museum and the Auraria foot bridge. Shuttle runs are also provided during Broncos football games, weather permitting.

The Gomaco car is stored on an open-air siding adjacent to the former Denver Tramways powerhouse at the 15th St. end of the line. Until 1998, this historic building housed the Forney Transportation Museum, but has since become an REI outlet store. DRHS has also acquired Denver Tramway streetcar .04, which it plans to eventually restore to operation

During 2009-10 the City and County of Denver conducted a feasibility study for a potential streetcar system serving primarily the East Colfax corridor, the main travel corridor leading eastward from downtown and one of the highest bus-ridership corridors in the Denver area. Utilizing a citizen’s task force and several interactive public meetings, the City analyzed alternative alignments and recommended a roughly three-mile alignment from downtown to Colorado Blvd. as a likely starter line. The City has applied for additional alternatives analysis funding to carry the project forward. The City’s website offers the following description of the study:

The Colfax corridor is currently functioning as a productive transit corridor and has experienced redevelopment and reinvestment in recent years. Stakeholders in the Colfax corridor have suggested a modern streetcar would have mobility and economic investment benefits. If these outcomes could be achieved they would also support the City’s broader policy objectives for transportation and land use as described in the East Colfax Small Area Plan, the Strategic Transportation Plan, Greenprint Denver, and Blueprint Denver. The goals for the Colfax corridor included:

The primary purpose of the study was to identify how a modern streetcar in the Colfax corridor would affect:

The secondary purpose of this study was to develop criteria that can be used to evaluate the potential for streetcar implementation in Denver ’s other transportation corridors.