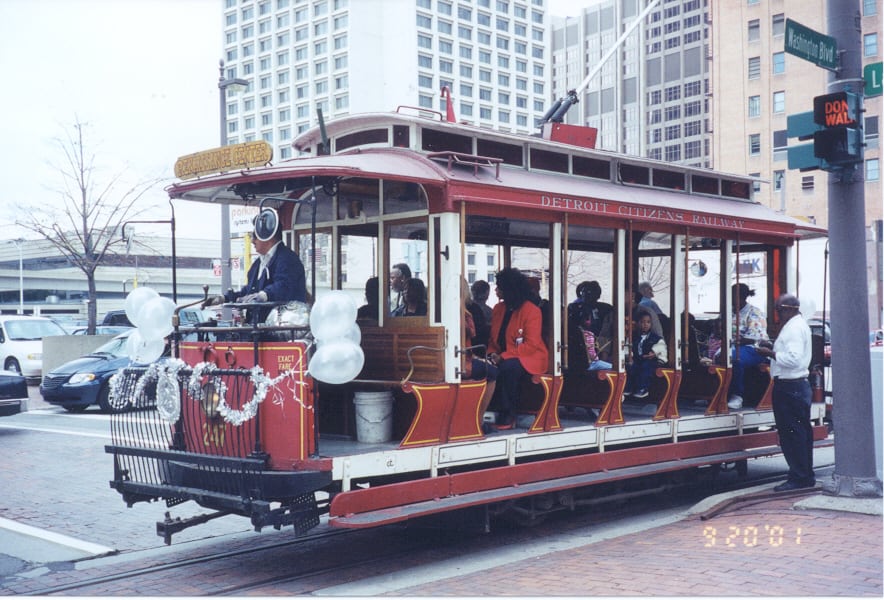 November 2003: End of the Line? There has been no service on the Detroit Downtown Trolley since June 21, 2003. According to an October 24, 2003 article in the Detroit News, the operation is to be formally shut down in November, to be replaced with a rubber-tired bus operation. An October 31, 2003 article in the Detroit Free Press announced that the city’s nine cars are to be sold, and the carbarn removed. While it is possible that there might be an eleventh-hour reprieve, it looks like this is the end. A sad conclusion for a system that operated for 28 years, but not entirely a surprise given the seeming lack of interest by the city in recent years. Thanks to Tim Davis for the reports.
History: The Detroit Downtown Trolley (formerly the Detroit Citizen’s Railway) was the first purpose-built Vintage Trolley system. The initial 3/4 mile segment opened in 1976, and a 1/4 mile extension was constructed in 1980. The line uses a fleet of single-truck, narrow-gauge trolleys imported from Europe. It offers year-round service connecting downtown attractions like Grand Circus Park, Cobo Hall and the Renaissance Center. The line is single-track with two passing sidings, the majority of which is on an unusual sidewalk right-of-way. It’s operated by the Detroit Department of Transportation.

Development: The line was developed in conjunction with a program to rehabilitate a five-block stretch of Washington Blvd., including conversion of this section to a pedestrian mall. The original 3/4 mile line tied the rehabilitated street to the Cobo Hall convention center. In 1980, the trolley line was extended another quarter mile paralleling the riverfront to reach the Renaissance Center, passing Hart Plaza, where a number of major public festivals are held each year. The final cost of the line was $2.72 million which included the carbarn ($422,000). Financing came from a variety of Federal, State and City sources.

Status: In 1979, the line was carrying 75,000 riders annually. By 1998, this figure had dropped to 3,350. By this time operation was intermittent, with plans to rehabilitate the line under active discussion. Local reports as of February 2001 were that only a single car was running, with trips once an hour. A 50 cent fare was being charged.

Equipment: Detroit owns a fleet of nine single-truck cars, 7 of which are from Libson, Portugal. There is also an English double-decker and a Swiss car. The cars are European 900 mm gauge (2’11-7/16″). 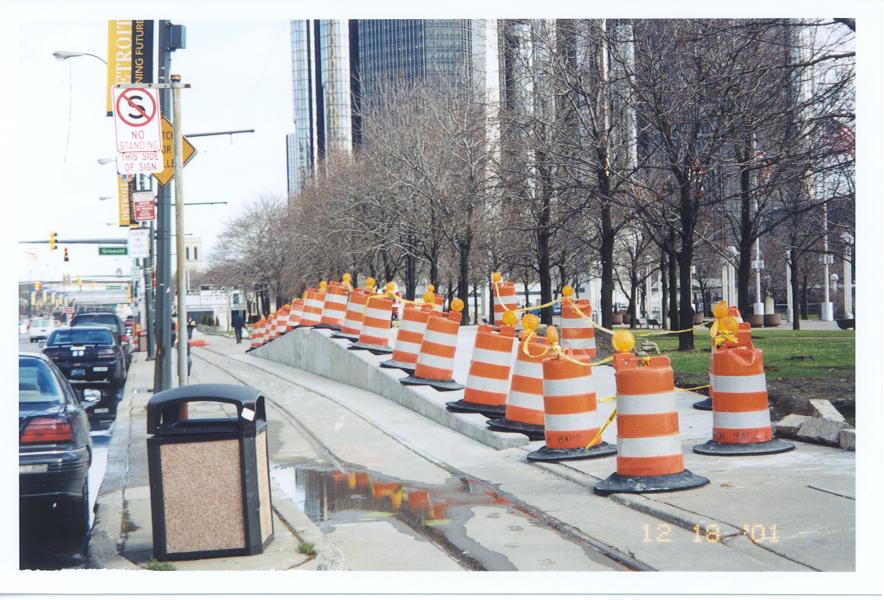 9/01- The trolley line has been shortened by about one block to facilitate construction of a right-turn lane into the Detroit-Windsor tunnel. Source: Timothy Davis

03/02- A new ADA loading ramp has been built on Jefferson St. near Griswold. Construction took place in December 2001, and the ramp provides a 3-foot high block platform next to the tracks. There has been much speculation in recent months about a plan to rebuild the fleet of trolleys, including modifications for ADA. Hopefully, more definitive information will become available in the near future. Source & photo: Timothy Davis

01/03- After a brief cessation of service, a single car is once again running on the line. Most significantly, the long-rumored rebuilding of some of Detroit’s trolleys has finally begun. On January 15 cars 247 and 4 were loaded onboard flatbed trucks and left Detroit for rebuilding in Seattle. Car 247 will reportedly have some of its bench seats modified to permit them to fold out of the way to permit wheelchair access via the wayside ramps shown in some of the earlier updates. Thanks to Timothy Davis for the news and the photos.

07/03- Tim Davis sends news that the trolley was shut down in late June “until further notice”. He also reports that another car has left the property for refurbishment in Seattle.

02/04- Tim Davis sends news that demolition of the line’s carhouse has begun, further sealing the fate of the system.