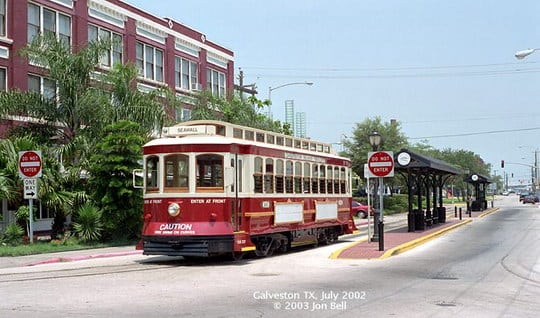 Galveston is a turn-of-the century boom town and major Gulf port. This tourist-oriented, island city of about 60,000 uses its trolley to link the Downtown “Strand” with other attractions on the island. The trolley was conceived as an additional tourist attraction and an aid to circulating visitors. It was built using $10 Million dollars in UMTA Federal grant funds, with the local match coming from the State and two private foundations. Service is provided with four unique diesel-electric replica trolleys built new for the operation by Miner Railcar. Each car has its own onboard diesel generator, and so the line has no overhead wires. All trackage is in city streets.

The trolley was the result of a lengthy redevelopment process. Studies addressing revitalization of the Strand had started in the early 1970s, and a trolley was first proposed in 1979. The line also had to overcome tremendous public opposition, but has since proven successful enough to merit an expansion of its downtown loop, which occurred in 1995. Most of the line’s 55,000 annual riders are tourists, with the heaviest riding during the peak May to September season. In 1995, operation of the line was turned over to Island Transit, the local bus system. Fare structure and hours of operation were integrated with the local bus system, and currently stand at 60 cents for adults and 30 cents for children.

In April 2005, a 1.5 mile extension to the University of Texas Medical Branch campus opened. Employees, students, staff and ambulatory patients of UTMB can ride the trolley for free.

Equipment: The four diesel-electric replica trolleys were built by Miner Railcar, of Pennsylvania. That company has now changed hands, and has become Kasgro Rail Corp. The four cars are identical, although each sports a different paint scheme. There are seats for 40 passengers, with room for 40 standees. The cars are not handicapped accessible. Cars are designed for an operating speed of 25 mph, and as built, weighed in at 63,000 lbs. In 2005, air conditioning was added.

9/01: Planning continues for extension of the Galveston Trolley. The 2.1 mile extension will connect the city’s largest employer (University of Texas Medical Branch) into the existing system. It is anticipated that over 15,000 students, employees and visitors will be able to ride the trolley downtown for lunch, business or other activities. The $4 million project will be implemented over the coming two years along with improved stations downtown. Source: Island Transit web site.

12/01: The Galveston Trolley system is currently undergoing a $750,000 track rehabilitation program. In addition, the four trolley cars are receiving air conditioning and are being repainted inside and out. The preliminary engineering phase of the line extension project continues, as reported in the 10/1/01 edition of Passenger Transport. Source: Island Transit

03/03: Jon Bell has added a Galveston Trolley page to his informative transit systems website. Four of his pictures have been added above, for the complete set please see Jon’s site.

8/04: Construction is underway to extend the Galveston Trolley approximately 1.5 miles to the University of Texas Medical Branch. Work is scheduled for completion in December. In early August, service was temporarily shut down due to the extensive trackwork required at 20th and The Strand. The Island Transit website has details and some photos of the construction now underway. Additional details come from the July edition of Rail Transit Online:

Construction is underway on the first $4.5-million phase of an extension to the island-city’s diesel-electric trolley line that will run from The Strand via Market and Sixth streets to Stewart Beach. The second segment, costing $6.5 million, will loop the tracks from the beach along Fourth and Market streets back to The Strand. Financing came from the federal and state governments plus a $240,000 contribution from the University of Texas Medical School, which will be served by the extension. Phase one is expected to be completed in December but work on the final section hasn’t been scheduled. Transit officials hope to lure more residents to the replica antique trolleys; currently ridership is 98 percent tourists. Once the project is complete, operating hours will be expanded and one additional car will be acquired, bringing the fleet to five. The initial 5.2-mi (8.3 km) line crossing the island was opened in 1988. A loop through The Strand, a popular shopping area, was expanded in 1995. Source: Rail Transit Online

4/05: Extension to UTMB Opens. The 1.5 mile extension to the University of Texas Medical Branch campus opened on March 14.

7/1/09: The Galveston Trolley operation has been suspended since the devastating flooding during Hurricane Ike in September 2008.