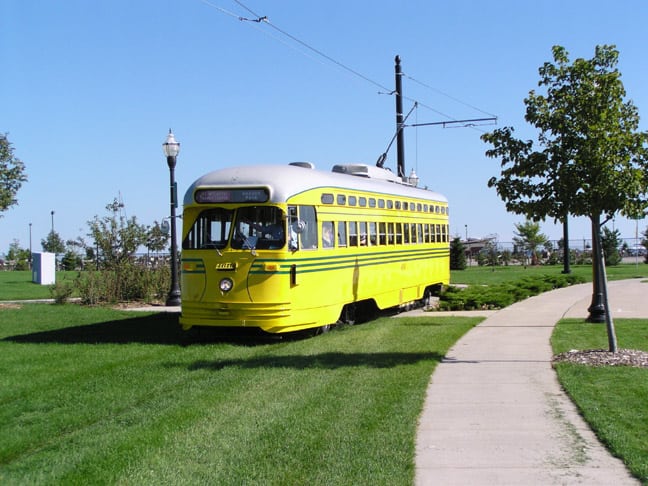 Kenosha is a city of 95,000 located along the shore of Lake Michigan a short distance north of the Illinois / Wisconsin border. Kenosha Transit operates a two-mile streetcar loop which connects the local commuter rail station to downtown attractions, a transit center, and the new 64-acre Harborpark residential development situated on the Lake Michigan shore. Daily service is provided using one of five refurbished Toronto PCC cars, each painted in a different color scheme. The entire project, including the a new maintenance building, was completed for under $4 million.
The two legs of the one-way loop are situated two blocks apart and the fare is 25 cents. Operating hours vary by season, with a shorter schedule provided during the winter months. A double-ended siding has been provided about midway through the route, adjacent to the city museum, which allows extra cars to be held to accommodate special events at the museum and the lakefront park.

Service is provided with five former Toronto PCC streetcars. These 1940’s vintage cars were obtained at a very economical price after Toronto retired its PCC fleet in 1995. Prior to their arrival in Kenosha, they were converted from Toronto’s broad gauge to US standard by swapping in trucks from a group of just-retired Chicago rapid transit cars. They also received general repairs, wheelchair lifts, and new “classic” paint jobs, each one an accurate copy of a PCC-era paint scheme from a famous transit property. Work was done by Miner Railcar in Iowa. All of the cars are stored and serviced in an impressive maintenance building which shares a site with a new Transit Center, providing easy transfers to local bus routes.

One of the outstanding features of the Kenosha system is its attractive right-of-way through the city. Kenosha offers an excellent example of how unobtrusive a streetcar line can be- it blends in very well with its surroundings, and has the appearance of a system that was planned as part of the community, not added as an afterthought. The entire right-of-way has been carefully landscaped, and features extensive use of New Orleans-style “neutral ground” with grass covering the entire roadbed except for the rails themselves. To protect the force-ventilated motors on the PCC cars a snow-fighting plan has been put in place to combat the snow that inevitably builds up in their path during the winter months.

ADA-accessibility: All five of the Kenosha PCCs utilize an onboard Stewart & Stevenson wheelchair lift salvaged from a transit bus. Taking advantage of the wide rear doorway on the PCC, the lift deploys through the open doorway and down to street level. When stowed, the lift does not block the center door.

May 2001: Kenosha has announced that the transit center that serves as the base of operations for the streetcar line will be named in honor of the late Joe McCarthy, the driving force behind the development of the new streetcar line. A reception and dedication ceremony will be held on Saturday, June 2.

February 6, 2002: In a surprise move, Kenosha’s Mayor has suspended streetcar operations until Memorial Day weekend. Impending state budget cuts were cited as the reason. Apparently, no public notice was given, catching locals by surprise. Of course, Kenosha wouldn’t be the first place where vintage trolley operations were impacted by local politics, and we will post more information as it becomes available. It will be interesting to see what kind of public backlash is created in Kenosha over the move. Please send additional information if you come across it. Source- Kenosha News, and postings on several e-groups.

February 11, 2002: According to the Kenosha News, streetcar operation will resume on weekends, after Mayor John Antaramian admitted Monday that he acted too hastily last
week in pulling the plug on the service. Source- Kenosha News

September 2004- A visit to Kenosha in early September offered an opportunity to view the complete build out of Harborpark Phase I and to observe construction underway on Phase II. The first phase of the development and its accompanying lakefront park were still undergoing final completion during my last visit, and it was nice to see the finished product. Also in the works is an expansion of the marina, the addition of a Civil War Museum, and a planned ten-story office building. 2003 annual ridership for the streetcar was 67,000.

December 2005- The Kenosha News reported 11/30/05 on progress to expand the City’s streetcar system from HarborPark to Uptown. As part of its 2006-2007 Capital Improvement Plan, the city council approved spending $1.5 million of local and federal money on the extension. The CIP shows $500,000 will be spent in 2006, 2007 and 2008 to complete a study and design and engineering work for the trolley expansion. City administration is hoping to expand the streetcar system to serve Brass Village, another brownfield site (like Harbor Park) which is currently being developed.

July 2009- In conjunction with the APTA Rail Transit Conference in Chicago, the APTA Streetcar & Heritage Trolley Subcommittee visited the Kenosha system on Saturday June 13. The group rode regular Metra service from Chicago, boarding a regular-service streetcar upon arrival. On board, Kenosha Transit’s Len Brandrup provided a welcome to the system and answered questions about its development and expansion plans. The group then toured the streetcar maintenance facility and transit center. Following lunch at the local diner, most of the group boarded the bus to continue touring intermodal centers in Wisconsin, while those more attuned to the technical side of the cars stayed behind and saw a fine demonstration of PCC technology and engaged in interesting discussions about heritage trolley equipment issues. The two groups joined up again in Milwaukee for dinner. Special thanks are due to Len Brandrup, Brad Preston and all at Kenosha Transit for hosting the group.

Kenosha continues to pursue funding for an extension of the system and has also acquired another PCC car for future use. The former Philadelphia car is now at the maintenance facility awaiting restoration.