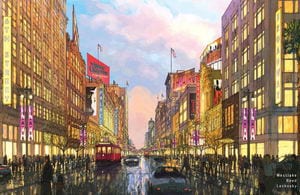 In addition to its traditional role as a major employment center, downtown Los Angeles is experiencing unprecedented residential growth, with a whole new generation of Angelinos rediscovering the magic of the city center. Night life is returning as well, including the Staples Center and new LA Live among other attractions. Streets that ten years ago were all but vacant at night are once again beginning to hum with activity. While the idea of returning Los Angeles’ famous streetcars to Downtown has been kicking around for at least a decade, pairing it with the Bringing Back Broadway campaign has finally lent some real traction to the effort.

Bringing Back Broadway is a public-private partnership initiative to revitalize the historic Broadway district between 3rd and 9th streets. The partnership seeks to “create a plan for a vibrant Broadway district that provides entertainment, eclectic cultural amenities and diverse retail options for Downtown residents and visitors to one of Los Angeles’ most remarkable historic areas, while serving as a central focus for revived downtown streetcar transportation”.

Interest in a downtown streetcar system dates back to 1998, when the Los Angeles Red Car Concept group began building interest in the idea. In 2002, Congresswoman Lucille Roybal-Allard secured $100,000 in federal funds for a feasibility study. In 2005, the Los Angeles Community Redevelopment Agency (CRA) commissioned the study, which worked through initial concepts including potential routes and other implementation issues. Following an extended period of work with local stakeholders, the non-profit LA Streetcar Inc. was formed in August of 2008 to implement the streetcar concept. The group is working to open the system’s initial phase in 2014.

A tiny sample of the sights along the proposed streetcar corridor appear below. These images can’t even begin to scratch the surface; these are just a few of the historic buildings and related attractions. Downtown Los Angeles has a truly impressive core of historic buildings and cultural attractions waiting to be discovered. Take a trip downtown on Metro and enjoy for yourself.

The $8.4 Million CRA/LA action comes on the heels of Los Angeles City Council’s action last week to allocate $1 Million to the project from Measure R Local Return. The combined actions will provide remaining funding necessary to complete state and federal environmental documentation underway at METRO, as well as complete conceptual, preliminary and final engineering and design for the streetcar.

“The CRA and City actions will get us through the technical steps necessary to make us ready for shovels to build the Downtown L.A. Streetcar,” said City Councilmember José Huizar. “Thousands of jobs, millions in annual tourism and revenue and an additional billion dollars in development will be a tremendous driver of revitalization that will positively affect our entire city and region.”

Today’s actions will also allow CRA/LA to contract with L.A. Streetcar Inc. for the establishment of a Community Facilities District, which will allow local registered voters the opportunity to approve a property assessment in order to raise private-sector funding. Private sector funding is the last piece of the puzzle before federal funding can be sought. A blend of private and public funds is necessary to achieve full funding for construction of the streetcar project. Source- press release

October 2010- LA Streetcar has just completed a successful fundraising event for the proposed Downtown streetcar. This October 4 post on LA.Streetsblog gives the details and includes LA Streetcar’s excellent new video. The video includes some nice simulations of the streetcar in action in Downtown LA. This October 1 opinion piece in Downtown News also weighed in on funding of the project.

May 2010- Another step forward for the proposed downtown streetcar took place in February when Metro agreed to procure an environmental consultant for the project. This follows the Downtown L.A. Streetcar Project’s submission of a $25 million federal grant application, which will enable LASI to secure environmental clearances in 2010. Assistance from Metro will be paid for by the CRA/LA and LASI’s federal funds that have already been obligated. The RFQ/P process will be initiated shortly following Metro’s solicitation procedures.

Click here for an April 30 LA Downtown News story on the progress of the Bringing Back Broadway initiative and the streetcar project.

April 2010- Downtown’s famous funicular, Angel’s Flight, has once again returned to service. The historic cars of “The World’s Shortest Railway” are once again traversing Bunker Hill. Click here for an article from Downtown News.

February 2010- Los Angeles Streetcar, Inc. has applied for $25M in federal funding under the Urban Circulator program. More information about this latest development was reported on the Blogdowntown website.

Until now, the project had been unsure whether it would be going for federal money to cover part of its estimated $90 – $100 million construction cost. “If you go for the federal funding, it just extends your timeline,” said Allen. Funds from the new grant program, announced on December 1 by U.S. Transportation Secretary Ray LaHood, come with drastically reduced requirements, allowing them to be put to use much quicker.

Projects from around the country are expected to apply for the money, but Allen thinks Los Angeles has a good chance of being picked. “We think that we’ll have as competitive of an application as any streetcar out there,” he said.

The $250,000, championed by Congressmember Lucille Roybal-Allard, is part of the House’s 2010’s Omnibus Appropriations Measure. It would help fund the environmental analysis the project will be doing in 2010.

Council is scheduled to consider the grant request on Wednesday. The Department of Transportation would submit the application in coordination with the streetcar non-profit and the Community Redevelopment Agency.

November 2009- In October, LASI released RFQ’s for two projects. LASI is seeking qualified consultants that can, 1) develop a Public Relations/Media Campaign, and 2) analyze a Special Benefit District for a Downtown Los Angeles Streetcar.

July 30, 2009- The July 29 streetcar workshop was well attended and included appearances from both the LA City Council members representing the project area, Jose Huizar (CD14) and Jan Perry (CD9). The workshop was held in the historic Bradbury Building, just a short distance away from the famous Angel’s Flight funicular, which continues to undergo testing prior to a planned reopening later this summer.

Public input was sought on three potential alignments, each of which is about 3.5 miles long and traverse most of Broadway from First Street moving south. Two of the routes would turn west on Pico and eventually circle back on Hill. A third option was go only as far as 11th before returning northbound on Olive Street. All three of the options thus serve the area with a two-street north-south “couplet” that spreads out the potential benefits of the streetcar while still making it functional as a circulator.

July 2009- LA Streetcar Inc. has launched a new website. The site details various aspects of the streetcar proposal including the proposed routes. A streetcar alignment open house is scheduled for July 29 at the Bradbury Building in Downtown Los Angeles. Check the website for further details.January 2009- A January 23, News Release from Councilman Jose Huizar’s office announced that Los Angeles Streetcar Inc. had appointed Dennis Allen as project manager. Allen will manage the Board of Directors and lead fundraising efforts for the nonprofit.

Councilmember Huizar introduced a resolution this week calling for City support of two pieces of federal legislation introduced by Congressmember Earl Blumenauer of Oregon. The Federal Streetcar Revitalization Act of 2009 would revise the federal Small Starts program to increase funding for streetcars and make the project selection process more supportive of streetcar projects, including adding consideration criteria related to streetcars’ reduction of greenhouse gas emissions and potential to reduce traffic. The Fast Starts Act of 2009 authorizes the Secretary of Transportation to make grants to assist with the funding of streetcar projects that are also supported with local funding.

A centerpiece of Councilmember Huizar’s Bringing Back Broadway revitalization initiative for the Historic Broadway Theatre District is a plan for a modern streetcar transportation system to connect Broadway and other downtown destinations. Modern streetcars are innovative, quiet, environmentally-friendly transportation circulation systems which significantly enhance the pedestrian experience, reduce single occupancy vehicle trips and encourage walking. LA Streetcar Inc is a non-profit which has formed to advance the public-private streetcar effort. The current federal process is considered overly cumbersome and time-consuming, with rules and processes which are not streetcar-friendly, which serves as a strong deterrent to the local effort to seek and pursue federal grants and funding. Councilmember Huizar is proud to lead the City’s efforts in supporting this important federal legislation which could allow Los Angeles to access and utilize federal funding and still meet the goal of riding a streetcar in downtown by 2014.

Councilmember Huizar is also a Board Member of LA Metro. A pdf copy of the streetcar resolution can be found here.

July 2008- a design charrette will be held on Thursday August 14 from 10 am to 2:30 pm at the Los Angeles Theatre Center, 514 S. Spring St. Topics for this interactive workshop include integrating the proposed streetcar with the new Broadway streetscape design, integration with other transit services, and other topics of interest to local stakeholders. The workshop is open to all.

August 2008- About 120 people attended the August 14 streetcar design charrette at the beautiful Los Angeles Theatre Center. The event provided local stakeholders with an opportunity to review concepts for the streetcar’s ultimate alignment on Broadway, and to discuss a variety of other related improvements.

The following day, the concept of a Downtown streetcar took another step forward as the Bringing Back Broadway Trustees voted to create LA Streetcar, Inc. The organization would be a sole purpose non-profit that would design, build and operate a streetcar system Downtown.