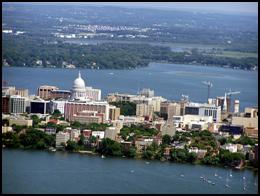 In 2006, a formal feasibility study was undertaken to examine returning streetcars to the Wisconsin capital. The study was an outgrowth of an original proposal presented to the City’s Long-Range Transportation Planning Commission by the non-profit Downtown Trolley Inc. in June, 2000.

In 2005, Madison mayor Dave Cieslewicz had convened a City of Madison streetcar committee to begin work on streetcars to complement the Transport 2020 regional transportation planning process. In April 2006, the Madison Streetcar Coalition was formed to promote regional transit in Dane County. The coalition, which is a partnership of 1000 Friends of Wisconsin, Downtown Trolley Inc., and the Dane Alliance for Rail Transit – has indicated its support of a regional transportation system and urged public support for regional buses, streetcars and commuter rail as part of the Transport 2020 plan.

“This coalition formed to help bring modern transit, including streetcars, to the region,” said Ward Lyles, transportation policy director for 1000 Friends of Wisconsin. “Our goals are to educate and excite the public about the opportunities that modern transit can provide here in Dane County .” The coalition also emphasized that there are many exciting options on the table, but that regional leaders need to make sure that technologies are used where they are most effective.

In late 2007, the streetcar proposal was formally shelved due to lack of local consensus on the project.

The Dane County Board and the Madison City Council have approved a long-range $242-million regional transportation plan that includes light rail, streetcars and an expanded bus network. The program, developed by Transport 2020, a committee made up of city, county and state representatives, includes a 10.9-mi. (17.5 km) commuter rail line between East Towne Mall and Greenway Center in Middleton, a streetcar loop in downtown Madison and more bus service throughout the metropolitan area. A source of capital funding for the program still hasn’t been identified. The next step will be to create an implementation task force and submit a funding application to the federal government for preliminary engineering. The state of Wisconsin has promised to fund half the estimated $2.5 to $3.5 cost.

July 2006- This June 22 article in the Wisconsin State Journal provides an update on the ongoing Streetcar Feasibility Study.

November 2006: The City of Madison Streetcar Committee continues to pursue its detailed examination of the streetcar proposal. The City has also developed a web page with details on the study’s progress. The site also describes the Committee’s mission:

Mission: Develop a plan for the street car study, conduct the study and issue a report with recommendations to Transport 2020 and the mayor and Council no later than November 1, 2005.

The report shall at a minimum cover:
1. Initial route and possible subsequent extensions to any Madison neighborhood that can support this mode;
2. A recommendation for the initial routes;
3. The timing and phasing of construction;
4. An estimate of capital and operating costs;
5. Possible financing plans;
6. Management and governance.

September 2007: Rail Transit On Line provided this report detailing Mayor Cieslewicz pulling the plug on the streetcar proposal he had championed:

A proposal for a $58-million, four-mile (6.4 km) downtown streetcar system has been abandoned by its champion, Madison Mayor Dave Cieslewicz. Widespread opposition by other elected officials and civic leaders convinced the mayor to throw in the towel after nearly five years of effort. “There is an old saying in politics; when you’ve dug yourself into a hole, the first thing you do is drop the shovel,” said Cieslewicz in an Aug. 13 news release. “So I have decided I will not continue to pursue the issue of streetcars in Madison . Major investments like streetcars should only be undertaken when there is broad consensus in the community, and that is clearly not the case with this issue.” A streetcar study committee will have one more meeting to wrap up its work and will then disband.” Cieslewicz had been fighting to have the streetcar incorporated into a new Regional Transit Authority that will manage a planned cross-county commuter rail project. Regional rail was backed by Dane County Executive Kathleen Falk, who also opposes streetcars, and competition between her and the mayor over which mode should be built first delayed both for years. Finally, last June 27, the two leaders announced a truce which allowed commuter rail to come first and the streetcar to be part of a second phase. With the streetcar now eliminated, it’s believed the RTA has a better chance of approval on the state and local level.