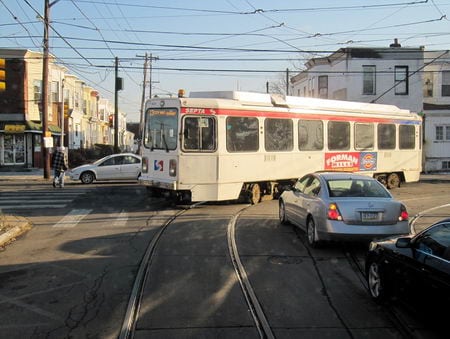 Philadelphia’s transit services (the nation’s sixth largest) are operated by the Southeastern Pennsylvania Transportation Authority or “SEPTA” and include electrified regional and high-speed rail, subway, light rail, streetcar, bus and trolley bus services. Philadelphia is among the small group of North American cities that never completely eliminated streetcar service. Although the system shrank dramatically in size after World War II, a portion was retained and in the early 1980s, new vehicles were acquired to re-equip many of the remaining routes. Five routes operate from West Philadelphia into downtown through a 2.5 mile streetcar subway that was opened in 1907 and is shared with the heavy rail subway under Market Street. These five “subway-surface” lines operate as the “Green Line” and together carry more than 55,000 daily riders.
Concurrent with SEPTA’s acquisition of 112 new broad-gauge streetcar vehicles in 1981-82, a like number of 1940’s-era PCC cars were put through an extensive overhaul program. The overhaul program lasted through 1988 and the rebuilt PCCs continued to operate on the three surface-only streetcar routes until retirement in 1992. Still in reasonably good condition, most of the PCCs were then auctioned off, and a large number were purchased for resale or for use on vintage trolley operations around the country, most notably in San Francisco. Philadelphia initially retained approximately 50 cars.

Coincident with the retirement of the PCC fleet in 1992, SEPTA substituted buses for streetcars on the last three surface-only streetcar routes, although the tracks and overhead wire were left in place. Strong local pressure was applied to return the streetcars and in late 1997 plans were announced to reactivate Route 15-Girard Ave. Originally, service was to be provided by a fleet of new vehicles but budget concerns ultimately led to the decision to rebuild a fleet of PCC-type cars instead. Girard Ave. is an 8.4 mile long line that crosses the city north of downtown, serving a wide range of Philadelphia neighborhoods, including many which were badly in need of reinvestment. Residents and their elected representatives saw the streetcar as a catalyst for positive urban change and lobbied hard to bring it back.

In November 2001, SEPTA’s board authorized a $23 million contract with Brookville Equipment Corp. of Brookville, PA for rebuilding 18 PCC cars at a per unit cost of $1.2 million. The Authority also obtained an option to rebuild a further eight cars at the same price. Brookville completely rebuilt the car bodies, equipped them with new trucks, added wheelchair lifts at the center doors, installed a more modern control system, and added air conditioning. Work on the cars was completed in 2004. Like the new Vintage Trolley replica cars being built for New Orleans, the remanufactured SEPTA “PCC II’s” are essentially a new vehicle in a “classic” package.

Service on the re-equipped line did not begin until September of 2005 due to local political situation involving parking spots (see updates below). In addition to the Girard Ave. line, SEPTA also operated a small group of PCC cars on a seasonal “Holiday Trolley” operation, but that operation was discontinued in 2004. Here’s a map of the six in-city trolley lines in operation today: 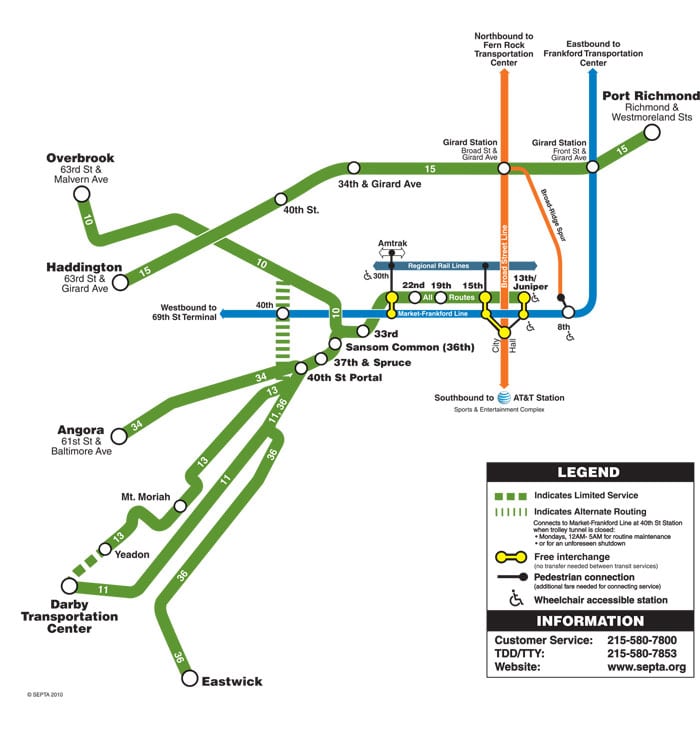 Today streetcar service continues on the five subway-surface routes plus Girard Ave. Given that the “new” Kawasaki streetcars are now 30 years old and not ADA-accessible, it seems certain that the current decade holds additional changes for the city’s streetcar system. The system’s aging infrastructure will present planners with some real challenges, including some of the sharpest curves of any of the world’s streetcar systems at 35 feet (10.7 meters).

12/20/10- SEPTA is preparing to reroute the east end of the Route 15-Girard Ave. streetcar for a period of up to two years while PennDOT rebuilds the I-95 Girard Ave expressway interchange. In late December the APTA Streetcar Subcommittee visited the construction site for the new trackage along Frankford Ave., including the terminus loop in front of the new Sugarhouse Casino project.

11/19/10- Click here for a description of the proposed waterfront streetcar project from DRPA.

3/18/10- From 1982 to 1995, a Vintage Trolley operation was in service along the Delaware River waterfront under the Ben Franklin bridge. The line shared a freight spur in the median of Delaware Ave. (now Christopher Columbus Blvd.), about a mile of which was electrified. Click here for a pdf of a 1987 brochure.

The line was a cooperative effort between the City of Philadelphia and the non-profit Buckingham Valley Trolley Association. This article on PlanPhilly.com has more details on the operation. The line closed in 1996 when the pier that was used as the operations base was sold for redevelopment. The BVTA subsequently moved their collection to a new home adjacent to the Steamtown National Historic Site in Scranton, Pennsylvania where they operate today as the Electric City Trolley Museum Association.

In March 2010, the Delaware River Port Authority approved a $6.5 million contract for environmental studies and preliminary design for a new waterfront rail line. The work, expected to take about two years, is to prepare the way for a proposed $500 million light-rail line in the middle of Columbus Boulevard between Pier 70 and Girard Avenue. The line, which could be operated by SEPTA or PATCO, would be designed to improve transportation and spur development on the Philadelphia waterfront. It also would provide service between two casinos planned for the riverfront, Foxwoods to the south and SugarHouse to the north.

(If you are interested in playing online, visit https://casinositesusa.com for reviews!)

9/5/05- Service begins! Regular service began as scheduled on September 4. A scheduled trip over the 8.2 mile line varies from about 45 minutes to just over one hour during peak periods. 24/7 service is provided, with 10 to 15 minute headways during the day, and up to 30 minute headways in the overnight hours. Click here for the Route 15 schedule. Thanks to Bob Vogel for the excellent photographs.

7/27/05- The $82M Girard Ave. Light Rail project is scheduled to begin carrying passengers in September 2005. A local political standoff over parking spaces adjacent to a short section of the route delayed the start of service for over a year.

11/3/03- The first remanufactured PCC car from Brookville Equipment was received in Philadelphia in September. While retaining the same general appearance of the PCC, the end product is almost a new vehicle, having been stripped to a frame and completely rebuilt. The new cars feature all new propulsion equipment including new trucks with AC motors, air conditioning, and new interiors. The remaining 17 rebuilt cars are expected in the next few months.

3/30/03- Although all 18 of the newly remanufactured “PCC-II” cars have been delivered to SEPTA, trolley service has not yet resumed on Route 15 / Girard Ave. Service was scheduled to begin in June of 2004, but a delay has resulted due to a standoff with local residents concerning parking on one of the streets that the route uses to access the Callowhill Depot. Click here for the story.

Page of photos of the new PCC-II cars in Philadelphia

Bet on the Philadelphia Sixers and Eagles at Betting Sites USA.net. Get a $20 risk free bet from MyBookie with this MyBookie promo code at https://bettingsitesusa.net/mybookie-promo-code/.