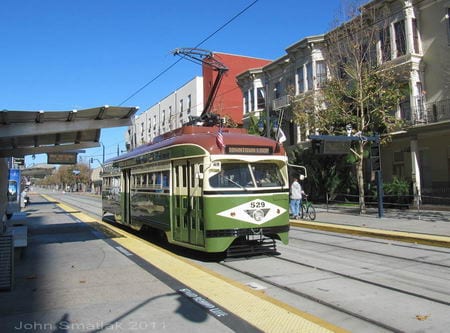 As the home of the pioneering San Diego Trolley, which began the U.S. light rail renaissance in 1980, it only seems natural that the city would also have a vintage trolley service. The non-profit San Diego Vintage Trolley Inc. obtained several vintage PCC type streetcars beginning in 2005 and set about restoring them using volunteers drawn from a non-profit and the staff of San Diego Trolley. The group completed the restoration of the first car in 2011 and it is now operated by San Diego Trolley over a portion of the light rail system in the downtown area.

The service currently operates every 30 minutes on weekends and holidays. A separate $2 fare is charged, collected on board the car. The car is operated with an operator and a conductor that greets passengers as they board through the back door. Plans include the restoration of additional cars to provide a spare vehicle and ultimately expand service.

MTS is also studying the feasibility of reconnecting Balboa Park, the San Diego Zoo and Downtown San Diego with a streetcar extension.
The project study corridor runs between the City College Trolley Station area, served by San Diego Trolley Blue and Orange Lines and over a dozen bus routes, and Balboa Park, in the vicinity of the San Diego Zoo. The study website has further details.

In addition to the Silver Line and the activities of San Diego Vintage Trolley Inc., the North Park Main Street Association had also proposed a line that would link the world-famous San Diego Zoo with remote parking areas and the North Park neighborhood. The new 3.5-mile line would utilize an historic streetcar routing along University Ave. and Park Blvd.

North Park Main Street is a non-profit neighborhood revitalization organization. In their proposal, they pointed out four primary benefits for the streetcar project:

A grass-roots campaign to engage the local community resulted in an impressive list of local business, planning and historical groups supporting the proposal. North Park Main Street also researched vintage trolley success stories around the country, looking for ideas that have potential for application in San Diego. A formal feasibility was conducted in 2002, but as yet no further action has been taken on this proposal.

Another local group owns several historic carbodies that it hopes to restore to operation. Check out their website for more details.

January 2010- Progress continues on the restoration of the first of San Diego Vintage Trolley’s refurbished PCC streetcars. Harry Mathis reports that car 529 now has all structural repairs, exterior and interior painting and undercoat virtually complete. A new floor has been installed and the roof has been reinforced to accommodate the new pantograph. New doors have been fabricated and are being installed, and new upholstery is in progress. Truck work is proceeding off-site. All work to date has been donated in-kind or paid for by cash contributions to SDVT.

November 2009- The first of San Diego Vintage Trolley’s refurbished PCC recently emerged from the paint shop in its new heritage paint scheme. Thanks to Harry Mathis for the pics.

July 2009- San Diego Vintage Trolley Inc. has acquired a forth car. The newest arrival is a former Philadelphia PCC. The car was acquired from the Museum of Transport in St. Louis, and arrived in early July. Meanwhile progress continues on the restoration of the first of the three former San Francisco cars. Thanks to Harry Mathis for the news.