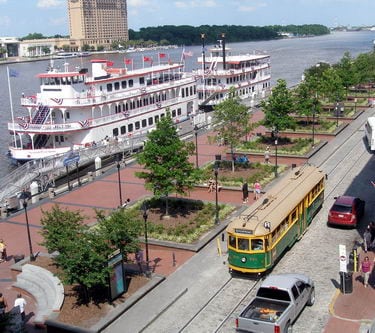 Streetcars last plied the streets of this famous Southern port city in 1946. In 2008, the streetcar has returned as an urban circulator and tourist attraction. An initial one mile demonstrator line began operation along a section of city-owned track in 2008. The operation uses a rebuilt Australian streetcar that has been transformed into a high-tech self-propelled vehicle. The line runs in-street on River Street along the Savannah River, including a section of trackage in cobblestone pavement passing directly through a bustling entertainment district.

The Savannah streetcar concept has been brewing for some time. In 2003, the local public transportation provider, Chatham Area Transit (CAT), proposed restoration of streetcar service on a four-mile line along River Street and Martin Luther King Jr. Blvd. Goals for the proposed system included aiding visitor mobility within the downtown and riverfront areas, reducing congestion in the city’s historic district, and helping foster local economic development.

The line itself is an existing freight track that the City purchased following a lengthy negotiation with the owning railroad. The lightly used 4.3 mile railroad branch line parallels the Savannah River near Downtown. A feasibility study was conducted by Team Inc. and Stone Consulting & Design, including an examination of several different route options. All of the proposed routes incorporated the trackage along River St. With the sale of the trackage to the City, plans once again began moving ahead, leading to the demonstration service on River St. in 2008.

The car itself is a high-tech rebuild of a 1920s era Australian streetcar, equipped with an on-board generator and energy storage system and an entirely new propulsion and braking package.