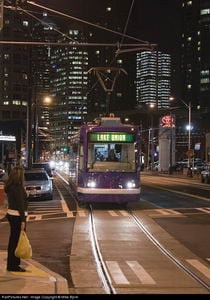 Seattle’s initial modern streetcar line opened in December 2007. Running 1.3 miles north from the city’s downtown area, the line connects the downtown retail area around Westlake Center to the vibrant South Lake Union neighborhood and its biotech campus. Microsoft billionaire Paul Allen’s Vulcan company is a major player in South Lake Union redevelopment. The city has designated South Lake Union as an urban center, meaning that is should absorb higher concentrations of jobs and housing than some other neighborhoods. According to city studies, South Lake Union could have 10,000 more residents and thousands more jobs in 20 years.
The streetcar project cost $52 Million, including the line’s three vehicles and its maintenance facility. Half of the project’s capital cost was covered by a Local Improvement District tax, the balance coming from federal and state grants, plus income from the sale of surplus city property.

Operated by King County Metro as part of the city’s transit system, the line connects with Seattle’s famous monorail at its southern terminus. Service is provided with Inekon streetcars similar to those used in Portland and Tacoma. Development has indeed moved at an impressive pace along the alignment, and a network of other streetcar lines is presently being developed. The Seattle City Council has approved a concept network consisting of five corridors with nine potential routes, and in 2010 approved the route of the First Hill streetcar line, which is now under construction.

5/5/10- On May 3, the Seattle City Council approved the route for the First Hill Streetcar, marking the first major milestone for the project. The route will operate primarily on Broadway and Jackson streets between Capitol Hill, First Hill, the Chinatown / International District and Pioneer Square.