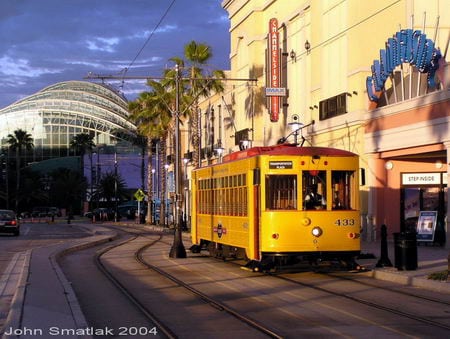 Tampa’s 2.7 mile TECO Line Streetcar System links downtown with numerous tourist attractions and remote parking areas. The line serves the so-called ‘visitors crescent’ that encompasses the Convention Center, Ice Palace, Garrison Seaport, Florida Aquarium and the historic Ybor City district. The single-track line uses primarily segregated rights-of-way in city streets, with several passing sidings installed to permit operation of up to eight cars at one time. The line operates with “hard meets”, and the location of the meets depends upon the number of streetcars operating at any one time. The line carried 420,000 passengers in its first year of operation, about 20% over projections. Ridership has remained over the 400,000 mark each year since. The one-way cash fare is $2.50, with various discounts available, and a $5.00 all-day pass. In December 2010, a 0.3 mile extension opened, allowing the line to penetrate further into Downtown Tampa.
According to the Tampa Downtown Partnership, more than $800 million in new, privately funded construction projects are recently completed, under construction, or have been approved within two blocks of the streetcar line since its inception. Many of these projects feature the streetcar system in their marketing and advertising. Half the funding for construction of the $31.5 million dollar system came from a federal TEA-21 grant, with the city and the Florida DOT also making substantial contributions. To provide for ongoing funding, a unique partnership was formed between Hillsborough Area Regional Transit (HART), the City of Tampa, and the local business community.

The system is managed by Tampa Historic Streetcar, Inc. (THS), a non-profit corporation created by an interlocal agreement between the City of Tampa and HART to manage day-to-day operations and maintenance. HART was then retained under contract with THS to perform these functions. To do so, HART created a Streetcar Division under its Operations Department. The THS board consists of seven City of Tampa appointees and six HART appointees, whose mission statement is to “offer a dynamic new component to Tampa’s transportation system by providing attractive, reliable, comfortable, convenient and safe streetcar service to local residents and visitors alike”.

Revenue is generated from three primary sources; a special assessment district comprising the area served by the streetcar; an endowment fund fueled by private sector contributions for naming rights of the system, and advertising and fares. The original streetcar business plan called for operation of the system without subsidy by HART or the City. Annual operating expenses are about $2.4 million. At the start of operations, the endowment fund had approximately $5 million earning a return and an additional $1.5 million in commitments. The naming rights for the system were sold to the Tampa Electric Company for $1 million, and the price tag for vehicle naming rights is $250,000. Naming rights for stations are offered at between $75,000 and $150,000. 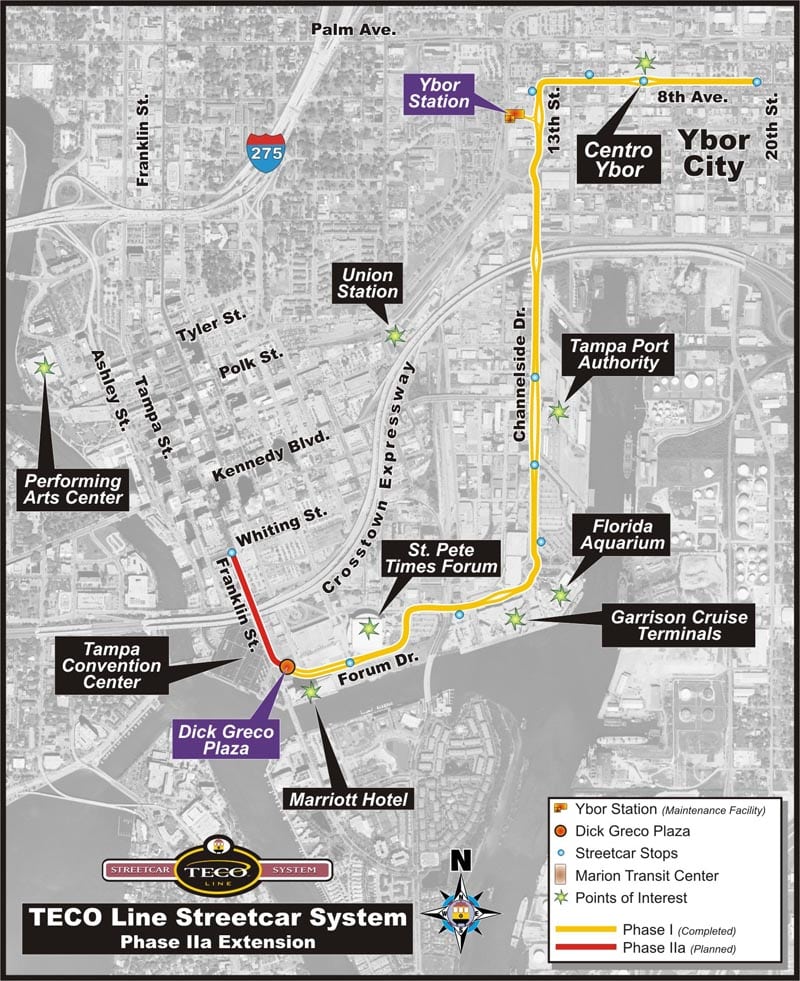 The line also has a pair of volunteer groups (which are also non-profits) serving in a “friends of the streetcar” support role. The Tampa & Ybor City Street Railway Society and the offshoot Tampa Streetcar Preservation and Restoration, Inc have restored original Tampa Birney car No. 163 and are working on a second car. Car 163 is available for charters on the system.

Equipment: Service is provided with nine new double-truck Birney replica cars built by the Gomaco Trolley company of Ida Grove, Iowa. The cars utilize rebuilt running gear and other components from Gomaco’s inventory of former Milan streetcar parts. The cars are constructed with welded steel bodies, although cosmetic rivets were added to provide a more appropriate appearance up close. The interiors feature such modern conveniences as air conditioning and automated stop announcements. Each car has two wheelchair spaces, and stations feature mini high-block platforms with folding ramps that are lowered into the open doorway of a car when required by mobility-impaired passengers. In 2004, a restored Birney Car from the original Tampa trolley system joined the fleet, and in 2005 an open-air “Breezer” replica car was added.

December, 2000: The December issue of Railway Age reports that Herzog Contracting Corp. is the successful bidder on the $15.5 million line construction project for the Tampa streetcar, encompassing trackwork and street reconstruction.

June, 2001: A bulletin just issued by Tampa Historic Streetcar Inc. provides a nice overview of construction in progress. It also highlights the growing economic development surrounding the streetcar route (now estimated at $2 billion dollars) as well as some of the attractions to be linked together by the line. The bulletin provides the following schedule: February 2001- construction began (a formal groundbreaking ceremony was held on March 20, 2001), February 2002- target date for construction completion, March-April 2002- system testing and startup, April 2002- begin revenue service.

The bulletin also provides an update on building the line’s operating endowment, now reported to have grown to $6.25 million towards a $10 million dollar goal. The naming rights for one of the streetcars was sold for $250,000 and the naming rights for four of the stations have been sold for sponsorships ranging between $75,000-$125,000. Source- Tampa Historic Streetcar Inc. 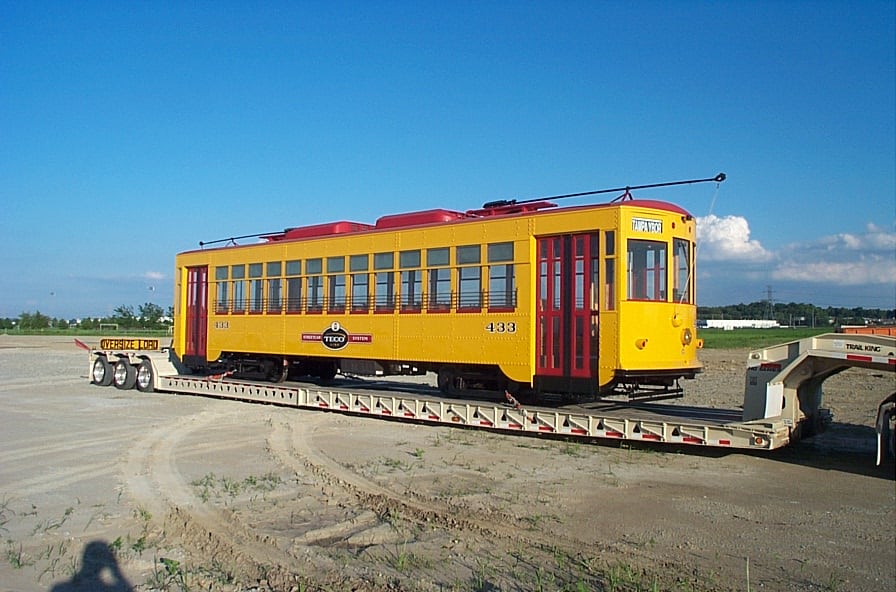 August, 2001: The Gomaco bulletin board had this very nice picture of one of the new cars en route to Tampa on board a highway trailer. Click on photo to enlarge.

March 2002: Jim Schantz has posted a series of construction photos, taken in February 2002, to the Tampa page on the APTA Heritage Trolley site.

October 2002: Opening of the line took place as scheduled over the weekend of October 19-20. David Pinero recently posted a series of photos and captions on the new line as seen the weekend before operations were to begin.

December 2002: The APTA Heritage Trolley Task Force met in Tampa on December 6-7. which provided an excellent opportunity to tour the new line. The photos below provide a complete trip over the line.

February 2003: Southern Transportation Plaza Opens On January 30, the $13.5 million, glass-domed transportation plaza was officially opened. The facility is the western end of the new streetcar line, adjacent to the Marriot Waterside hotel and the Tampa Convention Center. Since opening in October, the streetcar line had been temporarily using the next station up the line as a terminus. David Pinero’s TampaRail.org website provided excellent coverage of the event, including these fine photographs.

November 2003: An article in the October 20, 2003 Tampa Tribune reported that the system carried 420,000 riders in its first year of operation, 20% over expectations. Congratulations to all at HART on their successful first year! In other Tampa Trolley news, HART has exercised an option with the Gomaco Trolley Company for the purchase of a ninth car.

August 2004: Prior to the APTA Light Rail Conference in Miami in June, I spent several days in Tampa, (see photos below) . I was fortunate enough to be on hand for testing of the Tampa & Ybor City Street Railway Society’s restored original single-truck Birney Car. The group hopes to have the car available for special operations in the near future.

The system is doing very well, and planning continues towards extension of the line at the Downtown end. Development also continues at a frenzied pace adjacent to the system. As of late July, a permanent solution also appears to have been worked out to streamline the process of trolleys crossing the CSX interlocking, eliminating the need for the crossing watchman and TECO supervisor.

December 2004: The public debut of the Tampa & Ybor City Street Railway Society’s restored original single-truck Birney Car No. 163 took place on October 16 as part of the line’s two-year anniversary celebration. In December, the Gomaco Trolley Company’s replica “open car” arrived in Tampa for evaluation for possible purchase or lease. In other news, the city council on Sept. 24 passed a resolution calling for an extension of the TECO Line Streetcar north to Whiting Street and asking for financial help from the federal government, although a specific amount wasn’t mentioned.

March 2006: Ridership for the system’s third year of operation (ending October 2005) was 434,000. On New Year’s Eve 2005, the system pressed all nine cars into service and carried 10,500 riders. The system also continues to aggressively pursue advertising revenue, with three cars now fitted with lighted advertising sings on their roofs. The open-air “Breezer” car features an all-over advertising scheme as seen in the pictures below.

In 2005 the system also took delivery of a 9th replica car from Gomaco. Car 436 features several upgrades from the original group of 8 cars, including a deadman feature, folding steps, and a “door brake” feature that automatically makes a brake application whenever the doors are opened.

Development continues to sprout up adjacent to the line. According to the Tampa Downtown Partner ship, more than $800 million in new, privately funded construction projects are recently completed, under construction, or have been approved within two blocks of the streetcar line since its inception. Despite the quantifiable economic impact and respectable ridership numbers, the streetcar found itself in a media controversy in early 2006 over operating costs and HARTline’s operation of the system.

November 2006: Bay area residents came out in force to celebrate the fourth anniversary of the TECO Line Streetcar System on Saturday, October 14, taking a total of 10,141 rides during the In-Town Tampa Guide and Map Streetcar Fest. The final total far outpaced last year’s ridership of 6,084 for the event. Streetcar Fest offered riders a chance to jump on the streetcar for only 5 cents from 9 a.m. to 2 a.m. Restaurants and attractions from Ybor City to Channelside to Hyde Park joined in the fun with special discounts and events for streetcar riders. Source- HARTline press release

In other news, in September, the HART board approved a consulting contract to formally study the long-proposed .3 mile line extension into Downtown. The scope of work includes an environmental assessment and engineering services that will determine the purpose, need and feasibility of the project. Source- Rail Transit On Line 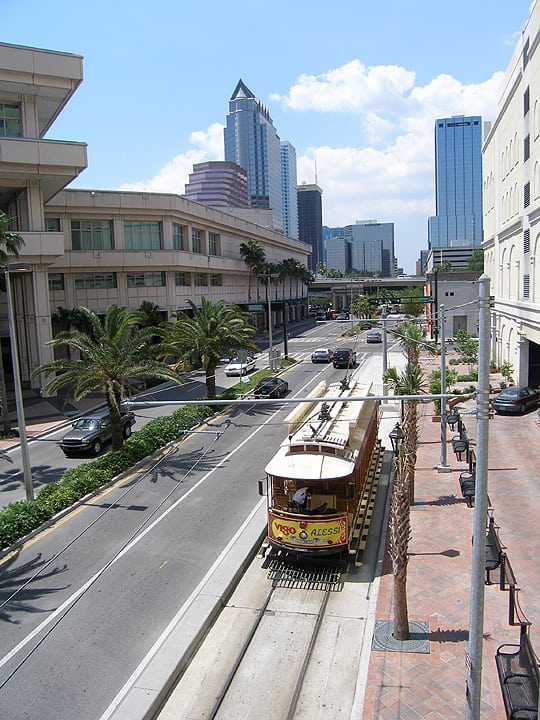 October 2007: October 2007 marks the 5th Birthday of the TECO Line streetcar system. The event will be celebrated at Streetcar Fest on October 13th, featuring nickel streetcar rides and entertainment.

For the year ending September 2007, the system set another new ridership record, carrying 437,611 passengers. In other system news, a feasibility study has been completed for the long planned 0.3 mile extension into the heart of Downtown Tampa. The project has been approved by the Tampa City Council, and is now working its way through the Federal approval and environmental processes.

The new line extension will run up Franklin Street from the existing end-of-line, bringing trolley service directly into the downtown employment center. Although work trips do not currently account for a major portion of the line’s ridership, that could change once the extension is complete in 2010. It’s estimated that 7,500 people should be living downtown and in the Channel District by 2010, so adding early morning service could thus tap into a new ridership base. Future plans call for the line to run through the north end of downtown to Ybor, forming a loop system with a dramatically increased service area.

October 2007: The October 13th Streetcar Fest celebration set a new one-day ridership record for the system, when over 13,000 people were carried. Tampa residents like their streetcars!

In other Tampa news, the TECO Line Streetcar will host a meeting of the APTA Heritage Trolley & Streetcar Subcommittee on November 30 – December 1.

December 2009: Construction has started on a 0.3 mile extension of the system into Downtown Tampa Bay. The existing 2.4 mile system is being extended to Whiting Street at the south end of downtown. Extension Phase IIa consists of a single track from the current terminus with a passing track within HART’s parking area north of Brorein to Fort Brooke Garage to a new station at Whiting. Three vehicles will be capable of boarding at the side-loading platform station and up to four vehicles will be able to stage at the passing track. Click here for a page on the extension project on the HARTline website.

December 2010: The 0.3 mile Whiting Street Extension into Downtown Tampa opened on December 19. Click here for a story in the Tampa Bay Business Journal.