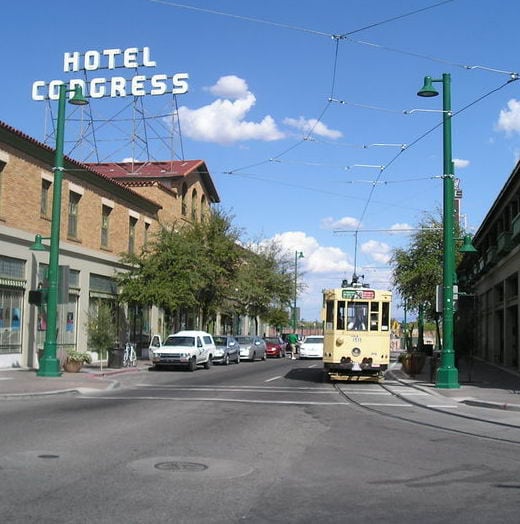 The Old Pueblo Trolley (OPT) was an all-volunteer “operating transit museum” which provided an evening streetcar service in central Tucson Fridays through Sundays. The line opened in 1993 and connected the University of Arizona with the Fourth Ave. business district. In 2011 it was closed to permit construction of the City’s new modern streetcar line, scheduled to begin operation in 2013. Whether the heritage service returns, and in what form, remains to be seen.
The idea for returning streetcars to Tucson came out of the University of Arizona’s 1985 Centennial celebration planning. Fundraising for a “bring back the trolley” campaign began in May 1983, and a formal feasibility study was completed in 1984. Although a 1984 ballot initiative for a bond issue to fund the project failed, the Old Pueblo Trolley group persisted in their efforts and pursued alternate plans. A single-truck Birney car was leased from the Orange Empire Railway Museum in 1985, followed by formal City approval for the privately-funded volunteer effort to construct the line in public streets.

OPT was able to utilize 6 blocks of vintage Tucson streetcar tracks, which the City uncovered in 1985. Following City approval of the complete track and overhead plan, track installation on the remainder of the route began in 1987 and was completed in 1992. Installation of historic light poles and overhead wire were also completed in 1992. In 1990, OPT had received a significant boost in the form of a $500,000 allocation from State Lottery transportation funding for support of the trolley as a demonstration light rail project. The money, which ensured completion of the project’s initial phase, was administered to OPT by the City of Tucson.

Operations began in 1993, with the Birney car being joined by an Osaka, Japan double-truck car. In its first year of operation, the line saw 25,000 paying passengers. In 1995, the ten-year lease of the Birney car came to an end, and it returned to the museum who had leased OPT the car. To supplement their Osaka car, the group has also acquired several other cars.

In 2006, Tucson completed a major transit investment study for its urban core, and in January of that year the mayor and city council unanimously approved the concept of building a modern streetcar line. Shortly thereafter voters approved a half-cent sales tax to help fund transit improvements. $75M in federal funding was obtained in May 2009, clearing a major hurdle for the 4-mile line to be built. The new line will use much of the same route presently used by the OPT operation, and how the heritage trolley operations will be integrated once the new line is built is still under discussion.

In the summer of 2009, work was completed on a 0.45 mile extension of the south end of the line, bringing the tracks under a rebuilt railroad underpass and around a short loop in the downtown area. This new trackage will also be utilized by the City’s new modern streetcar line.

News and Updates (scroll down for latest updates)

May 2002: OPT has completed construction of a wye on 4th Ave. and 8th St., adjacent to their carbarn. An article in the Arizona Daily Wildcat provides an overview of Old Pueblo Trolley’s other expansion plans. The line extension into downtown is being supported by “Citizens for a Sensible Transportation Solution” who have included the project as a component of their ballot initiative, detailed on their website. 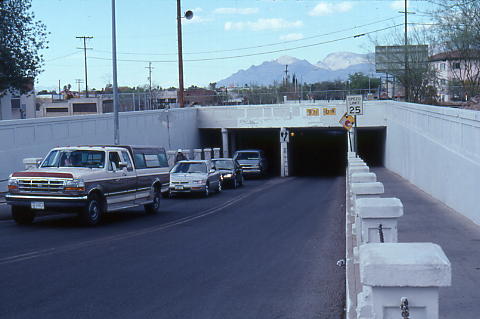 4th Avenue Underpass- OPT’s goal of serving the downtown core is about to take a major step forward. The 1916-vintage 4th Ave. underpass currently blocks access for the trolleys, but a new underpass is scheduled to be under construction by late 2002. The new underpass will accommodate both auto traffic and the trolley line, while the existing 1916 underpass will be converted to pedestrian and bicycle use. The excellent Tucson Downtown Alliance website includes coverage of this and other interesting projects, including the restoration of the historic Southern Pacific Railroad depot which is immediately adjacent to the underpass.

February 2003: OPT has acquired one of the ex-Lisbon single truck meter-gauge trams that the City of Aspen recently disposed of. Car 524 arrived in Tucson in January along with parts from a second car which was deemed to far gone to be saved. OPT staff are now working on re-gauging the car. In addition, the group continues to work on their yard track expansion plan. Thanks to Eric Sitiko for the news. 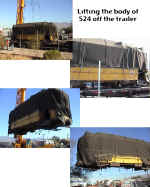 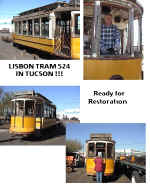 Brill truck which is to be re-gauged

March 2006: The City of Tucson is working through a major transit investment study for the urban core. Options studied in the initial alternatives analysis included both Vintage Trolleys and Modern Streetcars. The concept of a Modern Streetcar and a recommended alignment were unanimously approved by Tucson’s Mayor and Council in January 2006. The Tucson DOT has a very informative website, including details of the proposed alignment. 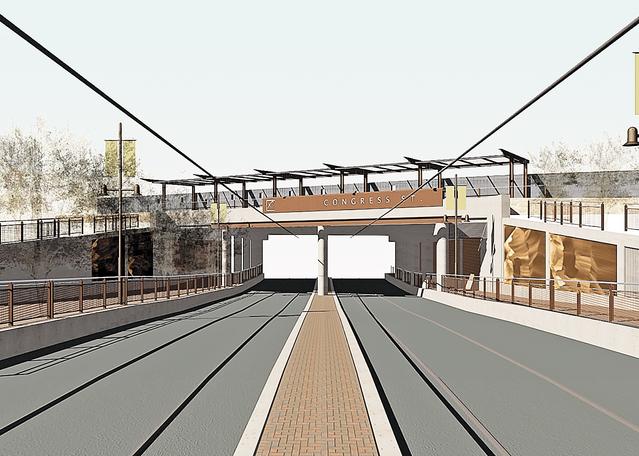 January 2008: The long-awaited extension of the Old Pueblo Trolley is finally underway. The $26 million dollar reconstruction of the 4th Avenue Underpass is currently underway, and the project will include the addition of track and overhead for the trolley. Improved pedestrian walkways will also be added, including a walkway to the adjacent historic railroad depot. A short in-street trolley loop will be constructed on the other side of the underpass that will allow the trolleys to loop around and return. Although under a half-mile in length, the extension will bring the trolleys closer to the heart of downtown, and help create a more seamless linkage between the Fourth Avenue shopping and entertainment district and the rest of downtown. Project completion is currently scheduled for Spring 2009.

In other Tucson news, the city’s Modern Streetcar project continues to move ahead. The new streetcar would travel over much the same route as today’s Old Pueblo Trolley (the 4th Ave. and University Ave. corridors), as well as accessing the downtown and U of A campus areas. The project is presently in the environmental assessment and advanced conceptual design phase. More information is available on the project website.

January 1 2009: In conjunction with the 4th Ave. Underpass project, a good deal of new streetcar trackage was constructed in Tucson in 2008. Currently track has been installed on both sides of the new underpass, connecting to OPT’s existing track on 4th Avenue and looping around the block via Congress Street, 5th Avenue, Broadway and Toole Avenue in downtown. The missing link through the new underpass will be installed once the underpass is complete. OCS will be installed all at one time once track is complete, although some poles that double as street light and traffic signal supports are already in place, and some bracket arms and span wires will be installed in advance of the conductor wire. Dick Guthrie and Gene Caywood of OPT provided a nice group of photos of the recent progress.

The next project is the City of Tucson’s modern streetcar project (federal funding matched by Regional Transportation Authority funding), which will likely be built in several phases. In December, word was received of the release of $25 million of the requested $75 million in federal funds. This money will pay for final design and the 7 modern streetcars. Still to be determined is what role OPT and the heritage cars will play once the modern streetcars begin operating.

May 2009: Tucson’s planned 4-mile modern streetcar line will receive $75 million in federal matching funds and city officials have visited Washington, D.C., to assure themselves that the funding is a reality, KOLD television reports. “Because voters approved the Regional Transportation Authority package in May, 2006, including a half-cent sales tax to fund projects, the federal dollars have become available. “Now, the city is trying to formalize the agreement and get going on the project.” Click here for an article on the streetcar funding on Arizona Central.com. Thanks to Edward B. Havens for the news.

May 29 2009: The City of Tucson has ordered seven modern streetcars from United Streetcar of Oregon. The seven cars will cost $23M. Click here for a related article.

Track and overhead are now in place through the 4th Ave. underpass. OPT photos

August 2009: OPT performed its first test runs of cars under the new 4th Avenue underpass and around the new Downtown Loop. Pictures of these first runs are included below. The official opening ceremony for the underpass is scheduled to be held on August 20. The trolley will be operated by the mayor to break the ribbon and trolley service will commence immediately thereafter and continue until midnight that night. Thanks to Edward B. Havens and Gene Caywood for the continuing updates from Tucson, and congratulations to all parties involved on this major milestone.

November 2009: The U of A recently added some updated content to its website covering the City’s modern streetcar project. The project received FTA approval to enter final design on September 30.

January 2010: Congress has appropriated another $4M for construction of the City’s modern streetcar project. This is the second appropriation for the project, bringing the total to $6M.

February 2010: Tucson has received a $63M stimulus grant for the construction of its modern streetcar system. Click here for an article from the Arizona Business Journal.

November 2011: Operations on the Old Pueblo Trolley ceased at the end of October so that construction work can proceed on the City’s new modern streetcar line. This story on the Downtown Tucsonan website provides more details. At this time it is unclear whether the vintage trolleys will return to operation in 2013.