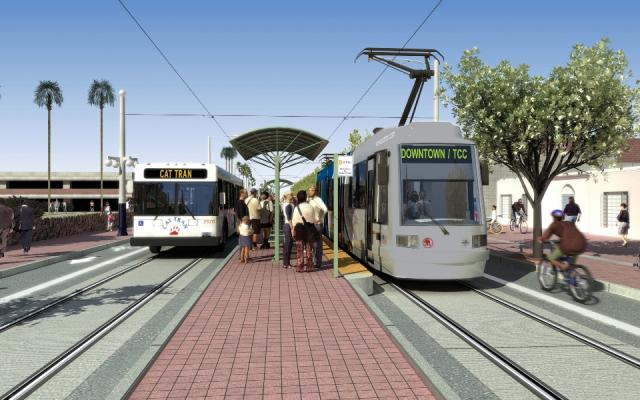 The City of Tucson is currently constructing a 3.9 mile long modern streetcar line that will connect the Arizona Health Sciences Center, University of Arizona, University Main Gate Square, 4th Avenue Shopping District, Downtown Tucson and the Mercado District development area. More than 125,000 people live, work and reside along the route. Seven vehicles have been purchased to serve the line which will have headways of between 10 and 20 minutes. The project is co-managed by the City of Tucson and the Regional Transportation Authority (RTA). Costs are estimated at $196.8 million, including the maintenance facility, vehicles and other supporting facilities. Funding is a combination of local and federal, details of which are provided on this project background page.
Streetcar operations first returned to Tucson in 1993 in the form of the Old Pueblo Trolley vintage trolley operation. This volunteer-based effort operated three days a week until 2011 on a 1.1 mile route along University Blvd. and 4th Avenue. In the summer of 2009, work was completed on a 0.45 mile extension of the south end of the line, bringing the tracks under a rebuilt railroad underpass and around a short loop in the downtown area. The new streetcar line will use much of this same route (and more), and how the heritage trolley operations will be integrated once the new line is built is still under discussion.

In 2006, Tucson completed a major transit investment study for its urban core, and in January of that year the mayor and city council unanimously approved the concept of building a modern streetcar line. Shortly thereafter voters approved a half-cent sales tax to help fund transit improvements. The project received a $63M TIGER grant in 2011.

Transportation Secretary Ray LaHood was in Tucson, Arizona, on April 12 for a ceremony to launch major construction works for the Tucson Modern Streetcar project and unveil the Sun Link branding for the new line. The 6·2 km route will run on-street from Arizona Health Sciences Center via the University of Arizona and 4th Avenue Business District to the downtown area and a loop in the Mercado District. There will be 17 stops serving a population of more than 85 000. Opening is scheduled for late 2013. Services will run from 06.00 to 02.00, with a 10 min frequency during the day and 20 min in the evenings.

A $56m construction contract has been awarded to the Old Pueblo Trackworks joint venture of Granite Construction and RailWorks Track Systems. Seven low-floor air-conditioned trams with a capacity of 180 passengers each have been ordered from Oregon Iron Works’ United Streetcar subsidiary.

The project is being managed by the City of Tucson and the Regional Transportation Authority as part of a $2·1bn transport plan supported by a sales tax which local voters approved in 2006. The federal Department of Transportation is meeting $78·7m of the $196·6m cost of the streetcar project, with the remainder coming from local sources.

‘Tucson is joining a growing list of American cities – from Portland, Oregon, to Charlotte, North Carolina – where the modern streetcar is spurring economic development, revitalizing downtown neighborhoods and attracting a new generation of riders’, said LaHood.

March 2012: Construction on the city’s new 3.9 mile streetcar line is scheduled to begin in April. Click here for additional details.